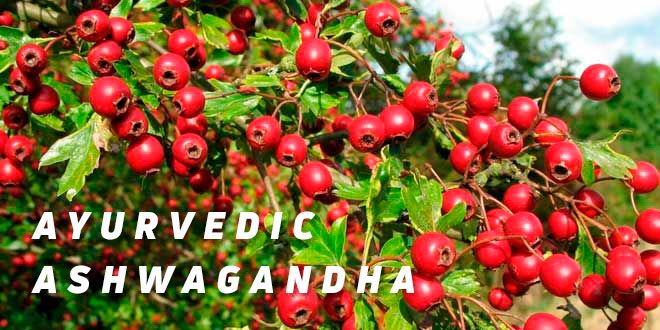 Properties of Ashwagandha and its connection to testosterone

What is the Ashwagandha?

Recent studies have shown how this plant with an uncanny name has the ability to combat insomnia and stress. However, we will focus on other less known effects but which are equally interesting.

But first of all, do not worry, you are not playing scrabble

Currently, there are 35 known alkaloids[1] and withaferin is the most renowned one of them all. This active ingredient produces a light anti-inflammatory effect[2], like many other vegetable substances.

Said phenomenon is highly important, since being chronically exposed to inflammatory processes results in a worse glycogen metabolism that can trigger diabetes and obesity[3][4].

Ashwagandha (withania somnifera) is one of the most used plants in the Ayurveda since ancient times.

Let’s not forget that even though many specialists believe that the fatty tissue is useless, the truth is completely different. Our ability to lose more or less fat depends precisely on this tissue[5], so controlling the inflammation can be one of the key factors.

Unfortunately, the bibliography on this plant is quite scarce, which is why most of the studies we will see have been conducted with animals. Nevertheless, we will talk about how its supplementation works

Withaferin has a structure with an steroidal nucleus

As I mentioned previously, this plant has been used for centuries to combat stress and if we talk about stress, we also have to talk about cortisol. For those who are not familiar with cortisol, it is a hormone that is released naturally by the body, but when its levels are high for a long time, it can trigger problems like diabetes, insomnia, depression and obesity[6].

Those who have high cortisol levels tend to have a more sensitive immune system[7], which results in a higher difficulty to lose fat and to preserve our muscle mass, due to the demand glutamine[8].

Study about Ashwagandha and Cortisol

Scientists conducted a test with horses about the effect of said plant on fatigue. They were given ashwagandha extract or placebo for 15 days in order to take samples and observe the cortisol levels.

The result was that those animals who took the supplement had an 11% less cortisol. We want to highlight that the lactate levels were similar in both groups. This was not the only study that reported said improvement.

There are other essays with rats that were given ashwagandha supplementation and that increased their tolerance to fatigue, since they were capable of swimming for a longer period of time without any issue[9].

Apart from its effects on cortisol, this plant also has antioxidant effects. This is quite important since some organs like the brain and the nervous system are quite sensitive to the free radicals, which can trigger diseases like Parkinson or Alzheimer.

As I mentioned at the beginning, there are some functions of said plant that can be quite useful for athletes. As we can see in the study[10], using ashwagandha supplementation increases the T3 and T4 hormone levels which stimulate the metabolism (especially the first one), helping us to burn fat more easily.

Said study also reported that it has a hepatoprotective effect, that is, it protects the liver by increasing the antioxidant enzymes like the SOD.

Ashwagandha and its anabolic effect

One of the most interesting properties of this plant is its anabolic effect. This is due to the fact that the plant can help to increase the testosterone levels up to a 15%, but this effect can vary from one person to another.

As we can see, the testosterone levels increased after taking ashwagandha

Even though we could think that this is a placebo effect, the experience of those subjects who were given supplementation was superior. A 60% of them reported an excellent effect against the 20% with placebo:

Another study (J. Ethnopharmacol, 1994) compared it with ginseng. Both groups showed a better response against fatigue during a physical activity, even though the muscle gains were higher with ashwagandha.

This fact has been confirmed with other studies in which it improved the physical performance when combined with other substances[13]. It also increased the maximum speed and the average absolute and relative power in a 2.9%, 8.8% and 10.1% respectively when compared to the placebo group.

After 9 weeks of study with Withania somnifera, the peak oxygen capacity increased in a 6.8% with a moderate intensity. There were no significant changes in the balance and blood pressure at rest.

This is certainly the most important study up to this date due to its results in human subjects. Said study focused on the effects of 1g of ashwagandha supplementation for a month on the physical composition. What happened?

The subjects experienced an increase in terms of muscle size while they lost fat, which resulted in more LBM or lean body mass. This fact has been discussed previously in other entries, which should not take most of our readers by surprise :).

Even though the research on this substance is still in “its infancy”, we should follow this supplement closely. Ashwagandha is currently being used to treat certain disorders or pathologies.

Its effects can be quite useful in terms of:

However, I would like to emphasize the latter, since we need really high testosterone levels to achieve this effect on the muscles.

Those who can benefit from this property are those who have low free-testosterone levels due to genetic factors or a pathology. However, I will wait until new studies come up so that I can update this entry and give a final answer. Although everything points to the fact that this supplement will be able to do this but not as effectively as many of us expect.

The Ayurveda uses Ashwagandha to treat oligospermia, which causes infertility in male mice.

Ashwagandha helps to reestablish the hormone balance and improves the fertility by lowering the stress.

It contributes to regulating the lutropin hormone (LH) in men with fertility problems. Moreover, in this cases, it also increases the testosterone levels (T).

Ashwagandha improves the thyroid function that regulates the reproductive hormones. In addition, it is an effective treatment for men who suffer hypogonadism.

This plant can improve the fertility, the quality of the sperm and sex hormones in men with fertility problems.

In a clinical study carried out with male mice, it was proven that taking Ashwagandha (Withania somnifera) for 60 days significantly increased the weight of the testicles and sexual organs. Moreover, Ashwagandha also improved the amount of spermatozoa.

It has been proven that Ashwagandha reduces the formation of ROS (reactive oxygen species) in infertile men.

The extract is also effective when it comes to improving the sexual performance in mice.

Ashwagandha is one of the best antidotes for mice with reproductive toxicity caused by arsenic due to its medicinal properties.

It also improves the semen metabolites in infertile men.

The effects of Ashwagandha on male infertility

Ashwagandha has been traditionally used in ayurvedic medicine as an aphrodisiac to treat male sexual dysfunction and infertility.

The clinical studies back up the fact that Ashwagandha increases the testosterone levels in humans apart from producing spermatogenesis in mice.

Human infertility affects both men and women. However, approximately half of the etiology in infertile men is unknown, even though the main cause of infertility is oligospermia.

Many men with sexual dysfunctions undergo alternative therapies apart from using medicines. Apart from helping with some basic problems regarding male infertility, Ashwagandha and its positive effects on stress and mental health have a positive effect on couples that suffer from infertility.

A pilot study lasted 90 days in Mumbai, India, with 46 men between the ages of 22 to 40 that suffered oligospermia (20 million spermatozoa per milliliter of sperm).

All the men had a history of frequent sexual relations with a healthy partner that did not suffer from infertility. Men randomly took a treatment with the whole range of Ashwagandha extract and consumed a dose of 225mg three times a day. On the other hand, the control group took placebo capsules three time a day. At the end of the treatment, the scientists measured the sperm parameters as well as the hormone serum levels.

After 90 days of treatment, these were the results of the study:

“The results of this study back up the safety, efficacy, and tolerance of the treatment with Ashwagandha extract”.

When should we take Ashwagandha?

Different specialists advise taking the recommended dose in several servings throughout the day, not in a single serving; one of them has to be taken one or two hours before going to sleep.

They also suggest taking withania for a month and stopping for a week approximately. In this way, the body will be able to benefit from all the properties from this plant.

Side effects of Ashwagandha

Buy an Ashwagandha and epicatechin supplement for muscle growth

We have designed a new product at HSN that combines Ashwagandha and Epicatechin extract which work in synergy according to scientific evidence. It stimulates the inhibition of myostatin and increases the testosterone levels in order to increase the muscle gains, shorten the recovery phase and improve the mood.

Check the complete catalog of ashwagandha supplements available at HSN

Myostatin: How to Inhibit it to Enhance Muscle Growth

Sergio Espinar is a sport nutritionist, specialized in fat loss and health in women. Coach, professor and speaker in the HSN Fitness School.
@Sergio_Espinar
Previous Oat Flour: Properties, types and how to use it
Next Prostate Problems – Symptoms and Care
Related Articles