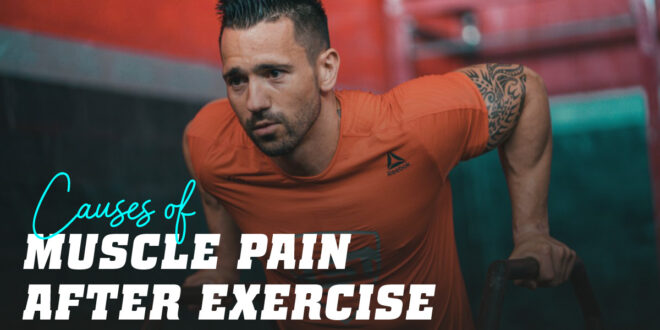 What Causes Muscle Pain After Exercise?

Have you ever wondered why your body hurts not the day after training, but 2 days later? Here’s what causes muscle pain after training.

DOMS is something we’ve all suffered at some point in our lives, either because we’ve just started training again, or because we’re been pushing ourselves.

It is characterised by the late onset of:

Who can suffer from it?

Currently, the most prominent theory explains DOMS as micronerve damage that occurs due to multiple compressions at the level of the neuromuscular spindle, leading to structural alterations in the axons (the end part of the nerves). 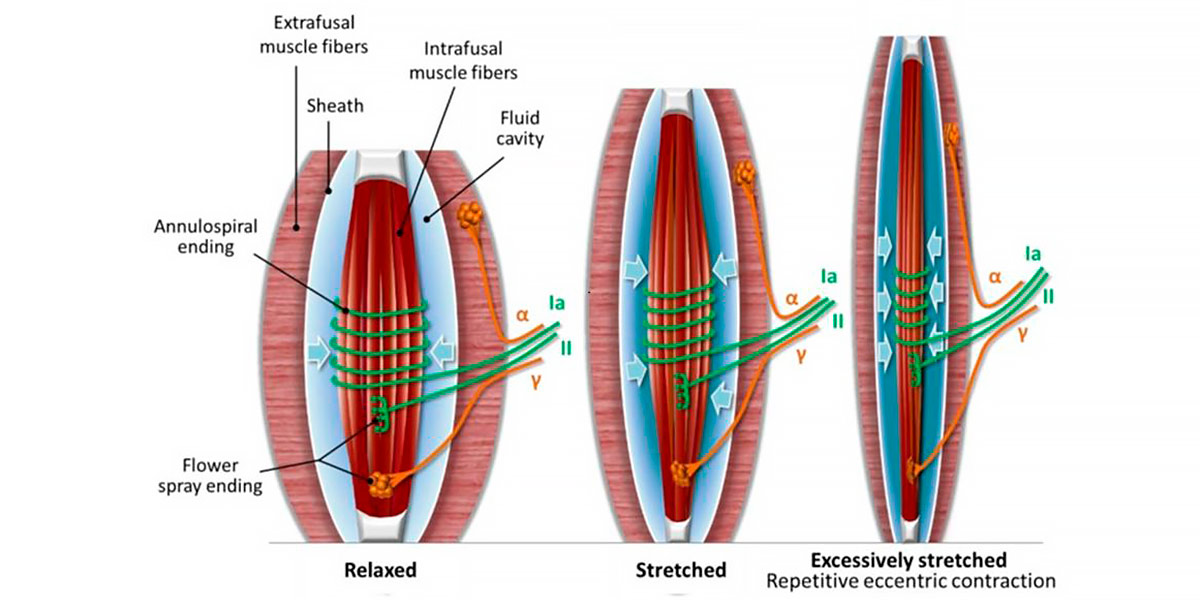 Figure I. Ultra-structural graphical representation of the musculoskeletal tissue and its nerve innervation in the neuromuscular spindle. The image shows the evolution of the etiology of muscle damage induced by physical exercise (Sonkodi et al., 2020).

This leads to subsequent inflammation of the musculoskeletal tissue, the result of muscle damage, which produces an activation of the immune system that sensitises the area.

Anyone can suffer from DOMS if they voluntarily exceed their capacity to produce strength.

That’s why DOMS normally appear when returning to training (or significantly changing your training programme), where the exposure to the stimulus is new and our tissue isn’t adapted. 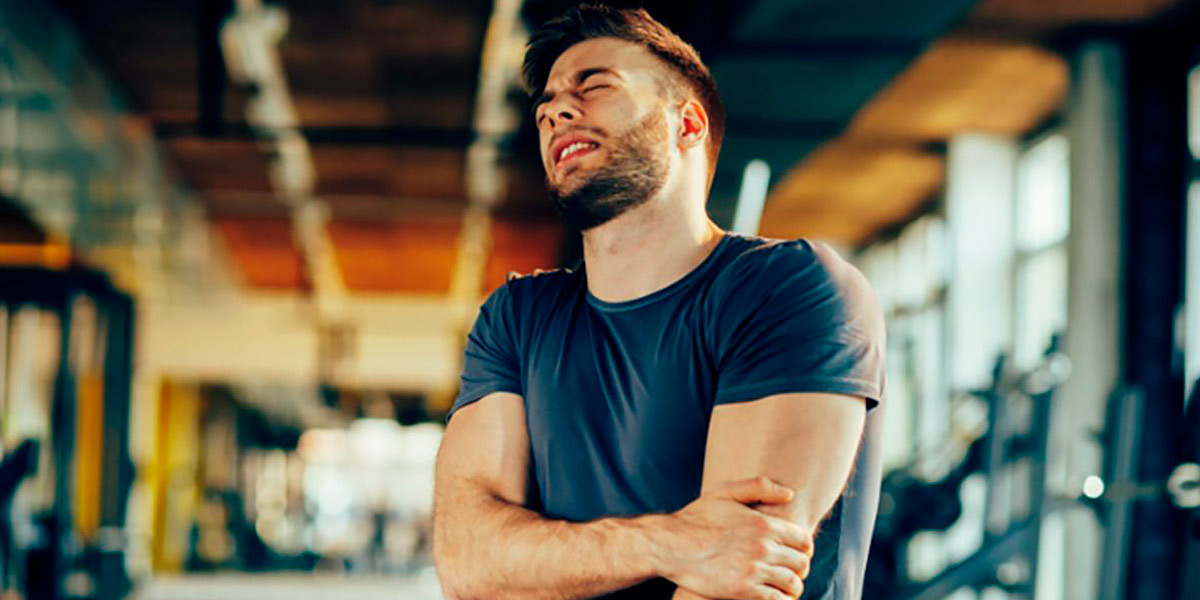 IS DOMS as the same as normal aches and pains?

“Aches” are another name for DOMS.

They’re called aches because of the subjective sensation of transient, intermittent throbbing pain that a person with DOMS experiences when demanding strength from the affected tissue (such as when walking when our legs are aching).

How to relieve muscle pain (DOMS) after exercise

Let’s start by explaining that the smartest thing to do is to avoid significant DOMS so as not to have to reduce your training load in the following sessions.

Why do I say this?

Because currently NO therapy has been shown to be truly effective for the significant reduction of DOMS when it appears. The most effective treatment is physical exercise, although pain reduction is temporary.

We don’t yet know of any recommended physical exercise programmes for the reduction of DOMS, it’s only been hypothesised that the positive effects are mediated by the release of endorphins and other neutrotransmitters inhibiting pain signalling.

And increased vascular flow by irrigation of the affected tissue that promotes the clearance of waste substances.

Hence, the recommendation is to maintain a high rate of low-intensity, moderate-duration physical activity.

What methods work to combat DOMS?

There is a lot of variability in the studies, and no clear conclusions are reached, but by way of simplification, in the following table you can see the effectiveness of the different, most widespread methods for the treatment of DOMS.

There are some pharmacological treatments and dietary supplements commonly used for the treatment of DOMS symptoms, such as:

And among the dietary supplements, the standouts are those that work with these mechanisms:

Gonzalo Argo made a good graphical summary of a great review by Harty et al. (2019) that’s open-access and which you can find in the bibliographic references section:

For many years it was thought (hypothesised) that aches and pains were a good thing, because for many years muscle damage has been proposed as a key factor in muscle mass gain:

“No pain no gain”

Now we know that this isn’t the case.

Damas (2017) published a review on the role of muscle damage on protein synthesis and the fate of this increase in MPS: 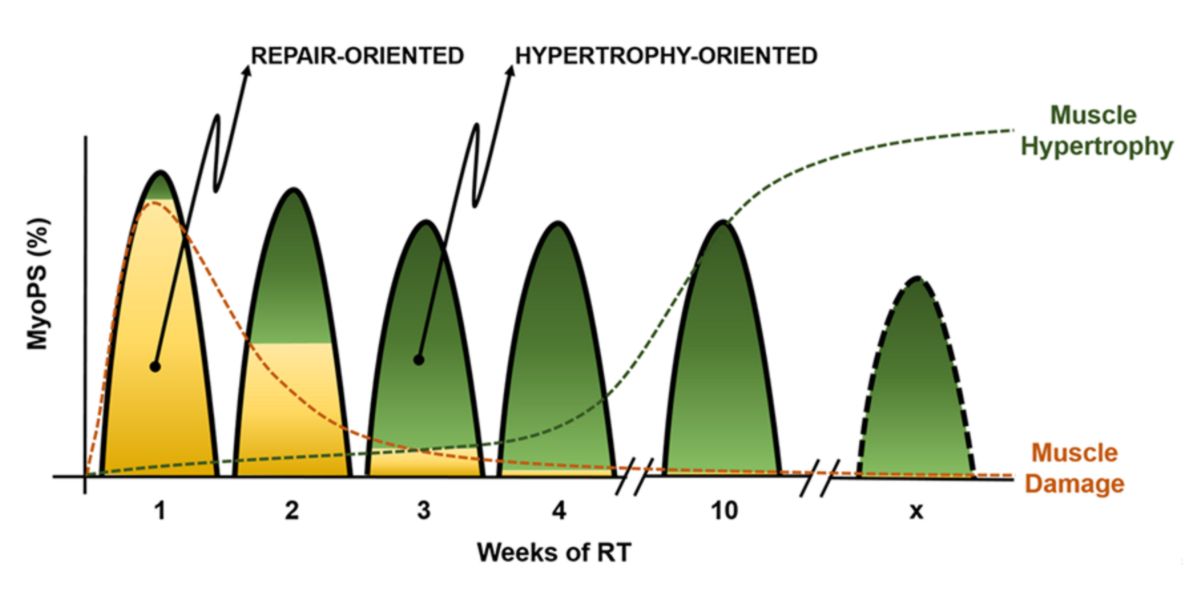 Figure V. Evolution of myofibrillar protein synthesis and its orientation in relation to muscle damage according to the weeks of training. (Damas et al., 2017).

The conclusion was that although protein synthesis increases significantly with muscle damage, it was intended for repair and did not create “new tissue”.

When the body adapted to training, muscle damage was reduced, DOMS too, and hypertrophy increased significantly, as although there was less MPS, it was used to create new contractile tissue.

Can DOMS be prevented?

It can be prevented by handling the training load.

Our body is able to exert a certain degree of voluntary effort (depending on your level of training, body composition, strength, etc.).

If we don’t exceed this capacity, we can combat DOMS effectively and therefore perform better in subsequent sessions, and our potential for physical improvement will be greater than if we developed DOMS.

How do you know your ability level?

It’s best to start with a training load (volume and intensity) that we know we can tolerate well, that won’t develop significant muscle soreness, and won’t limit our physical capacity in future training sessions.

When should you seek medical help?

One of the risks of intense physical exercise, which produces DOMS, is the development of Rhabdomyolysis.

This is characterised as the structural disruption of muscle cells that “die” and release intracellular components into the vascular bed.

After an extremely intense physical exercise session, if you experience:

You should go immediately to the emergency department of the nearest hospital, as you run the risk of extensive necrosis and potentially lethal acute kidney failure.

Other classic but more non-specific symptoms are:

"Knowledge Makes Stronger", Javier Colomer's motto, sets out his clearest statement of intentions expressing his knowledge and fitness experience.
@jvrcolomer
Previous Whey protein: why is it so important for sportspeople?
Next Is it better to take proteins or amino acids?
Related Articles 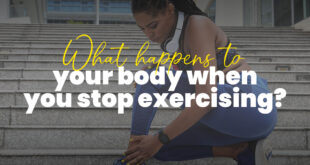