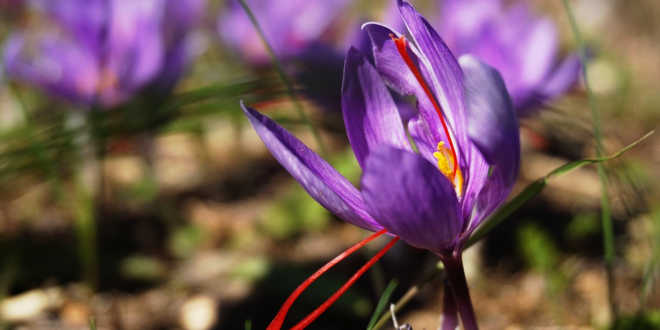 Saffron or crocus sativus is one of the most used spices in the Mediterranean diet. It is used in natural medicine due to its antioxidant, digestive, anti-inflammatory, immuno-regulating and anti-spasmodic properties. Currently, its bulbs hold an important value.

Saffron is also known as “red gold” and its scientific name is Crocus sativus. We are talking about an herbaceous and monocotyledonous plant that belongs to the Iridaceae family. It tends to be classified as a spice and food color. However, it has exceptional properties for the therapeutic field, as we are going to see now.

As a spice, its uniqueness lies on the fact that it is extracted from a flower. Specifically, it is the three stigmas that form the carpel of the Crocus Sativus flower that contain the essence of this valuable vegetable substance.

As a spice, saffron is quite special since it is the only one that is extracted from the bulb of a flower. More specifically, from the three stigmas that make up the carpel from the crocus sativus flower. This is the part that contains the essence of this valuable plant.

It is quite expensive due to the disproportion between the amount of raw material and the amount of product we get. In fact, to obtain one kilo of fresh saffron, you need to harvest a hundred thousand flowers. On the other hand, five kilos of fresh stigmas is what you need to obtain one kilo of saffron spice. Paradoxically, we always have to discard the leaves and roots of the plant, since its value lies in its flowers.

The most convincing theories about its remote origins place saffron in the Indian region of Kashmir. Apparently, it was the Phoenicians who, following their commercial routes through the Mediterranean Sea, were able to take it to Gaul or present-day France, and from there it spread across Europe.

The most convincing theories about its remote origins place crocus sativus in the Indian region of Kashmir. Apparently, it was the Phoenicians who, following their commercial routes, were able to take it to Gaul or present-day France. From there, it spread across Europe.

There are ancient history documents that reveal significant details about the importance that saffron had for these civilizations.

Apparently, the doctors that took care of the pharaohs’ health prescribed red gold to relieve stomach pain. Moreover, Hippocrates, who is regarded as the father of Medicine, encouraged its use to treat bad digestions and toothaches.

Crocus sativus before and now

During the Middle Ages, the therapeutic applications of saffron increased. In fact, it was used for many conditions, sometimes as treatment and others as palliative. Some of them were respiratory infections, scarlet fever, smallpox, asthma, insomnia, nerve palsy, heart diseases, gout, uterine bleeding, and even sight disorders. Therefore, this product became very popular due to its properties for the body.

Moreover, there are some historical curiosities about renowned personalities like Alexander the Great, who used it in his bath salts to heal his wounds. Or even Cleopatra, who also bathed with saffron, but with a completely different purpose: to enhance her beauty.

Currently, the countries that can be called saffron producers apart from Iran, which accounts for almost 94% of the world production, are: Spain, France, India, Greece, Macedonia, Morocco, Italy and, recently, Afghanistan. However, it should be noted that it is not as expensive in other places. For example, it has a quite affordable price in Iran.

The cultivation of saffron is not very complex since it can stand a wide range of temperatures, between -10 and 40 °C. It is probably more demanding in its edaphological nature, because a bulb needs a soil that is spongy and deep while allowing a quick filtration of the water.

It can grow both in a clay-calcareous soil or a silty one. However, it always needs a pH range that is closer to neutral, that is, neither acid nor alkaline. Moreover, it is important not to plant it in compact and excessively argillaceous soil. If you are planning to plant it in orchards or pots, you simply need to enrich the soil with peat or mulch.

It is important to know that the bulbs, the part that is planted, require a pre-conditioning before their cultivation. This consists of cleaning them, removing all the roots and the thick layers outside of the corm; Then, it is advisable to let them sunbathe for a few days, and store in small piles away from any source of moisture, between 5 and 10 ºC and with some straw. Keep them like this until the moment to plant them arrives, which would be between the months of June and July.

Bury the bulbs between 10 and 15cm deep, leaving approximately 10cm of space around each one of them. The bulbs multiply, so that one plant will allow to recover five more in a period of three years.

It does not need to be watered because it is a rainfed plant. However, if there is a persistent drought, watering it in September should be enough to satisfy the water needs of the plant until the harvest.

This process takes place between the second fortnight of October and the first one of November. There are two methods depending on the number of flowers that have to be collected:

Actually, its cultivation has dropped due to a decline in its demand as a food additive (natural yellow color). This is mainly due to its price in the market when compared to other artificial products that are used for the same purpose. Moreover, the importation of low quality but highly competitive products has also contributed to this situation.

From saffron to spice

This process almost resembles a ritual. Placing newspapers on the surface is a good way to ensure that we lose as less product as possible.

The stigmas, the red gold deposits, are put in an electric mill with a sugar cube in order to increase the friction. The result is a very thin powder that is ready to be packaged and sealed, where it will preserved for years.

Since ancient times, saffron has been considered a plant with medicinal properties. Not in vain, the Persians and Egyptians used it as an effective remedy against poisoning and indigestion, as well as an excellent aphrodisiac. Moreover, it was used as a balm to relieve the symptoms of serious diseases at that time such as dysentery or measles.

With the passing of time, we have been able to deepen our understanding about this spice, both at a medicinal and nutritional level. Unfortunately, some people cannot afford it due to its high price in the market.

In terms of minerals, it is rich in potassium, magnesium and iron. However, it also has a good supply of calcium, phosphorous, manganese, copper, zinc and selenium.

When it comes to vitamins, it provides vitamin A (as such and as carotenoids, mainly beta-carotene and alpha-carotene), B1, B2, B3 and B6 (specially this last one, since it provides 1.01mg per 100g) and ascorbic acid or vitamin C (with 80.8mg per 100g).

Its bright yellow color comes from a glycoside called crocin, and its smell comes from another substance called safranal, a volatile essential oil from the carpels. However, it is not the only oil, since saffron has plenty of these substances, like geraniol, cineole or linalool, among others. On the other hand, it contains traces of flavonoids, substances with a great antioxidant effect.

Benefits of saffron for the organism

Currently, there is serious evidence from several scientific studies that saffron carotenoids may contain anticancer and immunomodulating properties. In other words, regulators of the immune response to attacks. This seems to be due to their potential to inhibit the synthesis of nucleic acid (DNA and RNA) in tumor cells.

Moreover, saffron contains ingredients that are decisively and positively involved in the nervous system. Recent studies carried with people suffering from mild symptoms of depression reveal that saffron has beneficial effects on the mood. It has two active ingredients, called safranal and crocin, that increase the serotonin and dopamine, whose deficiency seems to cause depression. In addition, it is a product that enhances the memory and learning abilities thanks to the antioxidant properties of the carotenoids. On the other hand, there is a research line that is studying its hypothetical ability to inhibit certain proteins that are Alzheimer’s disease markers.

Benefits from the bulbs

Crocin (saffron bulbs) is responsible for very interesting benefits on different areas of the body.

It produces a hypolipidemic effect (it reduces the fat levels in the blood) and it can also lower the cholesterol levels. Therefore, it helps to prevent cardiovascular diseases.

It improves the oxygen transport through the blood and it regulates the circulation. In fact, homeopathy specialists still prescribefor circulatory disorders.

It relieves the menstrual pain and it helps to fix irregularities of the menstrual cycle, including amenorrhea (lack of menstruation). This effect is due to an increase in the blood flow to the uterus, which also has an abortive and contraceptive effect.

Other positive effects of consuming saffron for the organism are:

It regulates blood pressure due to the fact that it is rich in potassium, which can be beneficial for hypertensive people. In addition, it contributes to regulating the bodily fluids and preventing degenerative joint diseases.

Its high iron content is useful for treating iron-deficiency anemia.

There are three remarkable features regarding its vitamin content:

Saffron in the kitchen

It is advisable to smash and soak the strands in warm water for a few minutes before adding it to stews or other dishes.

With this trick, we will evenly add color and flavor to the broth. If you use powder you can skip this step.

Although we have been talking about the virtues and properties of saffron, nothing is perfect and precisely because of this we cannot overlook the chance of experiencing some side effects. Its consumption is not advised under certain circumstances.

If we react to a controlled dose, we can experience anxiety, dizziness, nausea, and mouth dryness that causes appetite disorders and headaches.

When there is an intoxication due to an excessive dose, the reactions are similar to most cases of intoxication: diarrhea, vomits, acute abdominal pain and headaches. In addition, it is even possible to see blood-stained urine.

An overdose (which involves consuming at least 10 grams) could trigger a deadly intoxication. First of all, it begins with a hallucinogenic phase with symptoms of strange behavior. Then, we will experience tachycardia, dizziness and a progressive paralysis of the central nervous system that ends with death.

Who should not take saffron:

Alberto Ricón is a specialist in nutrition and food hygiene with a lot of experience in this field. He works as a Food Safety Technician in Castilla La Mancha.
Previous What is Gluten and what does it do to your body?
Next Folic Acid – A necessary vitamin for pregnancy
Related Articles