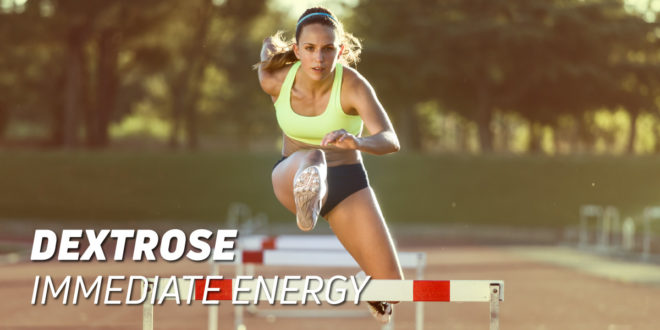 Dextrose: What is it, Uses and Intake

Today, we are going to talk about dextrose, a type of sugar that is used around the workout to obtain an immediate energy supply easily

Unlike what we usually hear from simplistic nutrition trends that flood social media, sugar is not the cause of all our problems.

Neither it is the cause of cardiometabolic diseases or diabetes. This is a disease that is triggered by visceral obesity, not due to carbohydrates.

Are sugar and carbohydrates to blame?

Obesity causes an excessive accumulation of triglycerides in the adipocytes. Consequently, the lipolysis increases as well as the discharge of free fatty acids to the bloodstream.

These free fatty acids enter the cells through the fatty acid transport protein. Then, they trigger lipotoxicity because they are stored in places that are not meant for this (like the hepatocytes, myocytes or cardiomyocytes).

This leads to the inhibition of the phosphorylation of the insulin receptor tyrosine residues (IRS1). Consequently, it reduces the translocation of GLUTs (glucose transporters) to the cell membranes, so that the glucose molecules from the blood will not be able to enter the cells.

All in all, due to the loss of sensitivity to the effect of insulin on the adipocytes, the lipolysis inhibition drops chronically. Once again, this results in a higher discharge of free fatty acids to the bloodstream. They accumulate in ectopic tissues, triggering inflammation, toxicity, as well as vascular and nerve damage. Like that, the circle is complete.

Figure I. Molecular mechanisms through which the accumulation of fatty acids in non-adipocytes negatively conditions the glucose metabolism (Snel et al., 2012).

Sugar is not the enemy. The real problem is overfeeding, which is why we can see graphics with the following tendency: 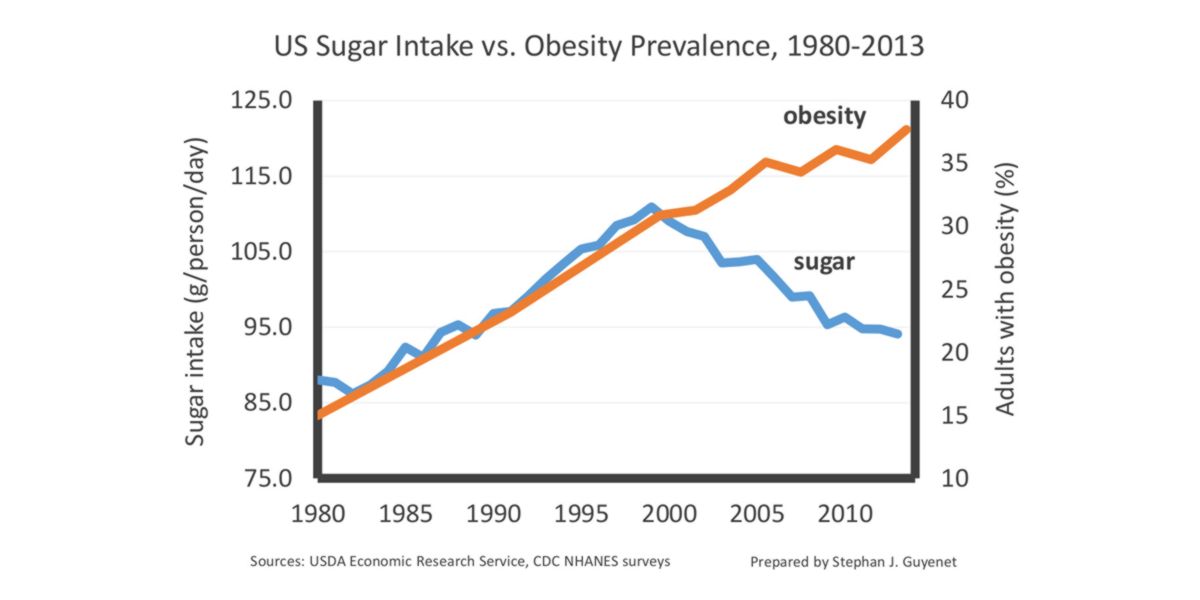 Despite the fact that the sugar intake has drop since the 90s, obesity continuous to grow steadily.

This disease is also increasing the number of endothelial dysfunctions (cardio-cerebrovascular) as well as the morbidity/mortality of an obese person considerably.

Eating carbohydrates will not fatten you up

Almost all fruit is exclusively made up of carbohydrates, most of them sugar.

Do people who eat pizza and ice-cream become obese?

The energy density of this products is extremely high. Together with their hyper-palatability, they lead to chronic overfeeding which results in a continuous calorie excess which increases the amount of fatty acids in the organism.

However, the fact that processed products can lead to obesity does not mean that they are always the cause: we all know someone that eats tons of pistachios, sedentarism+inactivity… And they also are obese.

We have made this brief introduction in order to avoid radical comments because we said that sugar is not bad. Unfortunately, everything is more complex than that.

What we do know is that carbohydrates are a source of energy for athletes, since it is the main nutrient that they used during physical exercise.

As the intensity increases, the percentage of energy we obtain from the glycolysis also increases. This is due to the increase of the respiratory quotient (the relation between the CO2 moles we produce with the O2 we consume).

Many of you will be probably thinking that it is better to go for polysaccharides like starch (complex carbohydrates) before sugar. In general, this is also a valid strategy.

But everything goes to waster when:

In the end, let’s not forget that glucose goes to the blood while the most complex carbohydrates will only change the absorption rate.

To put it simply, dextrose is glucose.

They are synonyms: dextrose is the term that is commonly used in the food industry. It is a hexose (made up of 6 carbon atoms) and the main difference is that glucose tends to have a closed chain hydrocarbon (cyclic) while dextrose is open (acyclic). 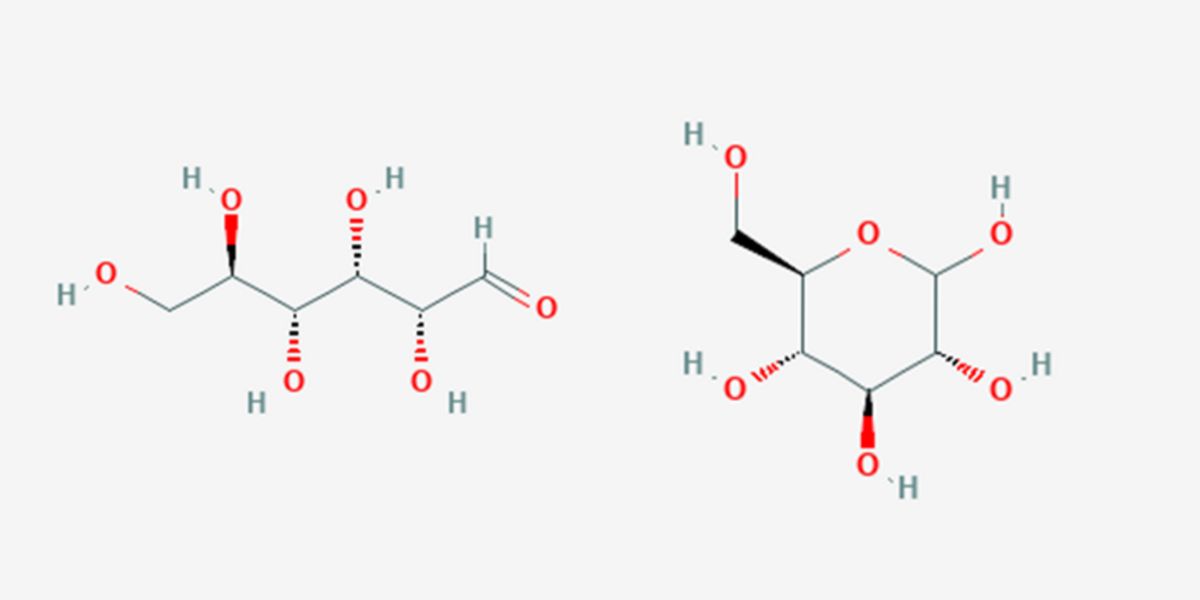 How can we obtain dextrose?

Like glucose (not sucrose or tabletop sugar), we obtain dextrose from the hydrolysis of vegetable starch.

Usually, corn starch is nothing more than a glucose polymer, made up of 200 000 glucose units. We just simply have to depolymerize it until we obtain the glucose monomers.

Carbohydrates undergo the same digestion regardless of their complexity. However, the enzymes that act upon them are different depending on their polymerization.

We are going to use this image from Boron & Boulpaep (2009) to explain this point.

Let’s start with image A:

We are still in the intestine, let’s see what happens next…

Now, let’s move to image B:

If you consume dextrose, your body will not have to perform any of the previous steps. Therefore, we will avoid potential problems, specially if we do physical exercise (due to the reduction of the splanchnic blood flow).

The absorption of carbohydrates takes place in the intestine when they are monomers (monosaccharides). 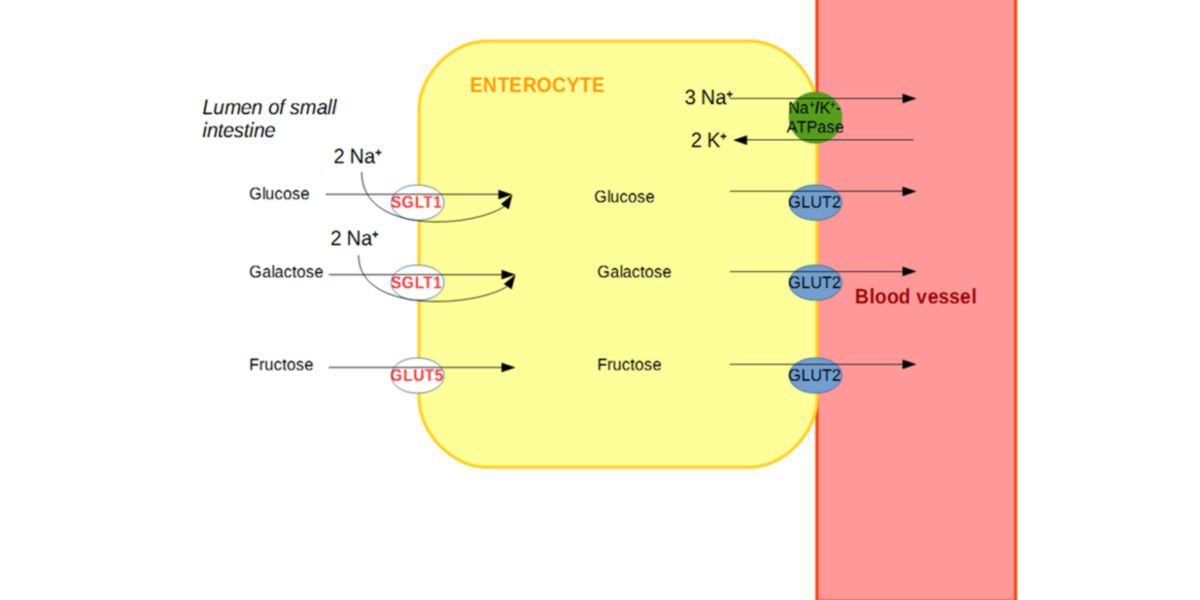 Figure V. Absorption of monosaccharides in the enterocyte. Transport process from the lumen of the small intestine to the blood flow through the apical and basolateral membrane.

Glucose and galactose share transport (SGLT1), which takes two sodium molecules and one of glucose and takes them to the enterocyte. In other words, it takes them from the intestinal lumen.

This happens because previously, the sodium-potassium pump-ATPase has taken sodium from the cell on the opposite side to the bloodstream.

Because, if we do not control the amount of sodium, it would trigger an osmotic process that would carry water to the enterocyte until the cell would literally explode.

What happens with fructose?

On the other hand, fructose uses a unique active transport (GLUT5) in order to reach the same point as glucose and galactose. Once inside the cell, all the monosaccharides enter the bloodstream though type 2 glucose transporters (GLUT2).

How come? Well, it is actually quite easy, look: 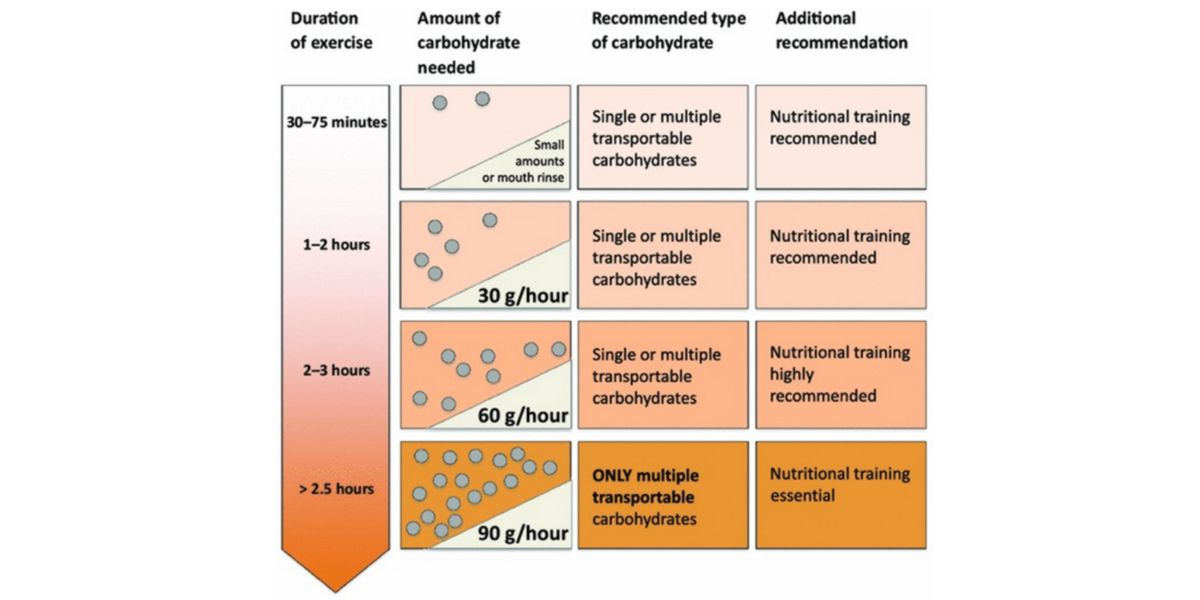 See how taking 90g/hour ONLY suggest using carbohydrates that need different transporters? Above all, this is due to the fact that the SGLT1 become saturated with a rate of 0.83g of glucose / minute (Jeukendrup, 2004). Therefore, using more than 49g of glucose is pointless because our body is not going to absorb it.

It will continue to travel to the colon, where it will ferment, producing meteorism and gastrointestinal discomfort.

However, combining glucose and fructose, since they use SGLT1 and GLUT5, allows us to take up to 1.26g / minute without saturating the transporters.

The recommendation of 90g / h (1.5g/min) is based on an anecdotal observation from another study. There is an hypothesis that this is due to the activation of the sweetness receptors (T1R2 and T1R3) which produce a mediated signalling through the Ca+/CM complex on the peptide, similar to type 2 glucagon (GLP2). Consequently, it forces the translocation of the GLUT2 to the basolateral and apical membrane. Nevertheless, let’s leave this topic for another day. 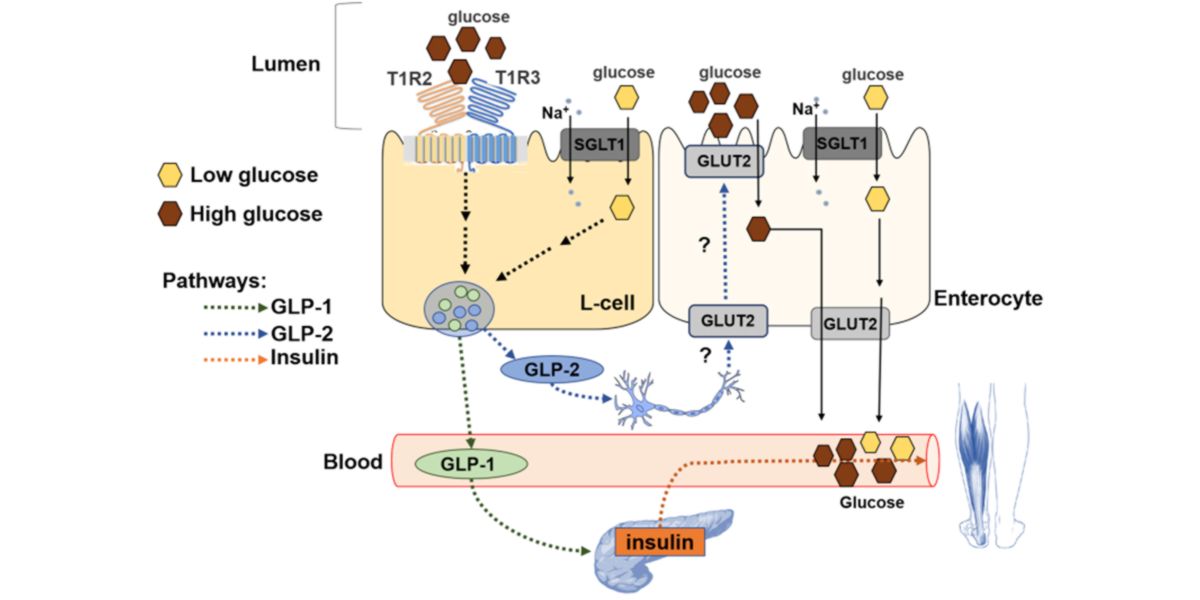 Figure VII. Molecular translocation of GLUT2 to the apical membrane due to the activation of the T1R2 and T1R3 receptors after saturating SGLT1. (Smith et al., 2018).

Fructose is quite good, specially to recharge hepatic glycogen, but not for the muscle tissue, since it lacks fructose transporters.

On the contrary, dextrose (glucose) accesses the myocytes quickly thanks to the phosphorylation of the IRS-1/PI3K/AKT. This element regulates the activity of AS160 and Rab-GTP, which results in more GLUT4 translocation to the cell membranes. 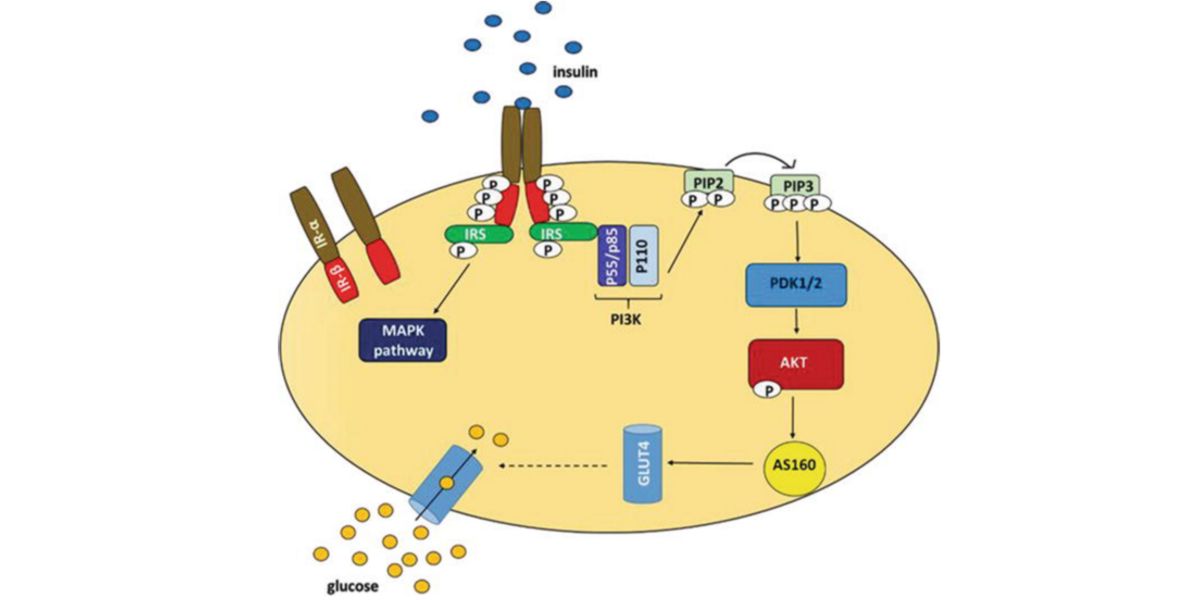 Figure VIII. Molecular translocation of glucose transporters (GLUT4) in the muscle tissue after the phosphorylation of IRS-1.

Once inside the cell, glucose is broken down due to a process know as glycolysis, which produces pyruvate.

Due to the effect of the pyruvate dehydrogenase  complex (PDHc), it becomes Acetyl-CoA. Then, it enters the tricarboxylic acid cycle and becomes 3 NADH+, 2 FADH2 and 2 GTP. Together with the NAHD+ and ATPs produced during the glycolysis and pyruvate dehydrogenation, they provide 36 ATP molecules.

If you want to know how many carbohydrates you should take during the workout, click here.

Why should you consume dextrose?

Some of you have probably already given up, but those who have reached this point in the article are probably thinking: “please, how can I put all this into practice?”.

Well, dextrose is superior to other carbohydrates precisely due to its simplicity.

The fact that it is a glucose monomer means that it does not have to be broken down (hydrolysis) when it reaches the intestine. Therefore, it can get there quite fast, without producing gastrointestinal discomfort. Actually, this is a very common symptom of taking carbohydrates around the workout, since it requires a distribution of the blood flow to the muscle-skeletal tissue. 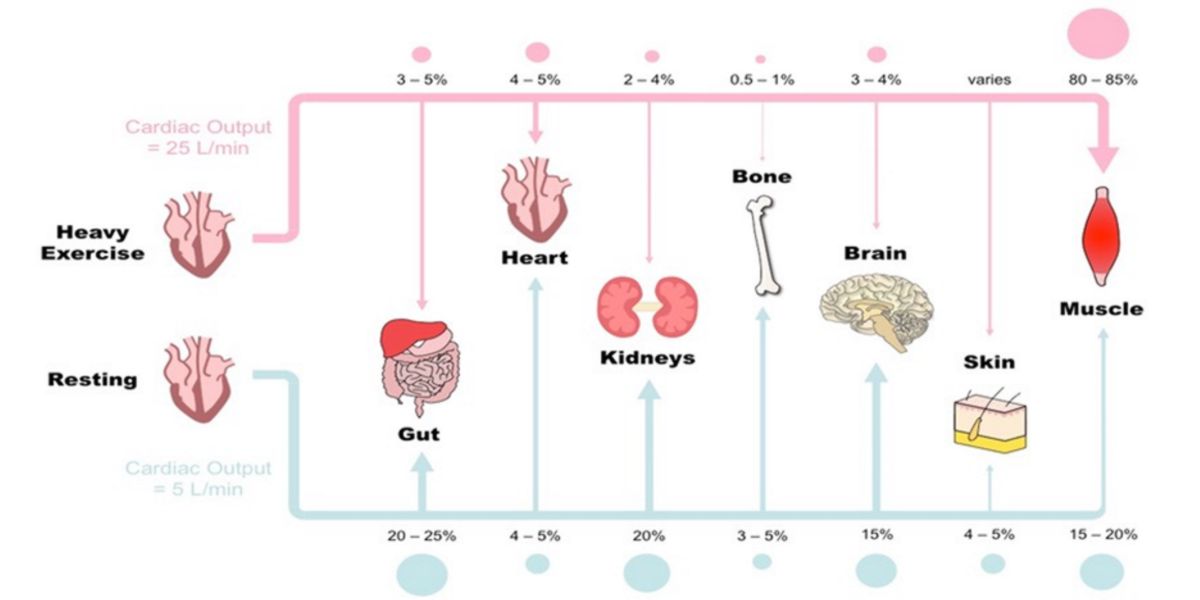 The dextrose transport is immediate through the SGLT1. Then, it reaches the blood and goes to the muscle cells so that it will: 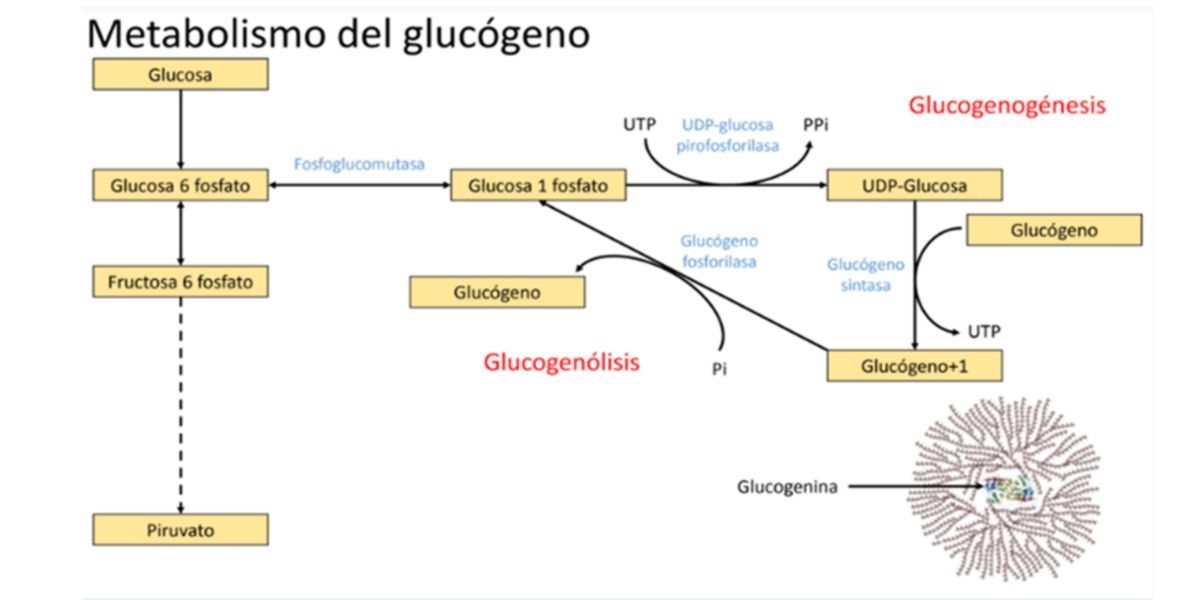 Dextrose allows us to discharge a lot of glucose to the blood very quickly in order to nourish the muscles without producing gastrointestinal discomfort.

How to take Dextrose?

Here you have a “model” protocol of how to use dextrose during the intra-workout.

Even though it is hard to establish a standard dextrose intake, a “basic” intra-workout procotol would be:

He is a specialist in metabolic physiopathology training and in the biomolecular effects of food and physical exercise.
Previous Voluntary Discomfort – How to Improve As a Person
Next Fitness Pizza Recipe
Related Articles