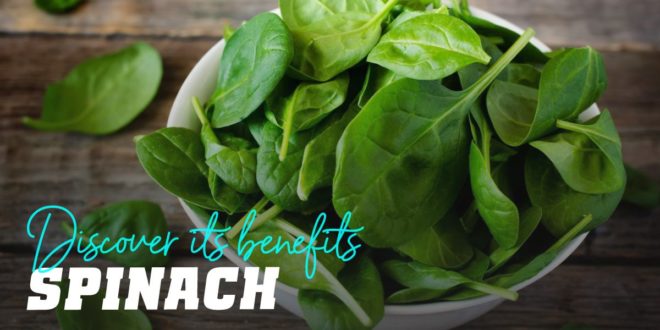 We present the superfood of Popeye, which has lasted through to today: Spinach, one of the green leafy vegetables with the greatest health benefits. 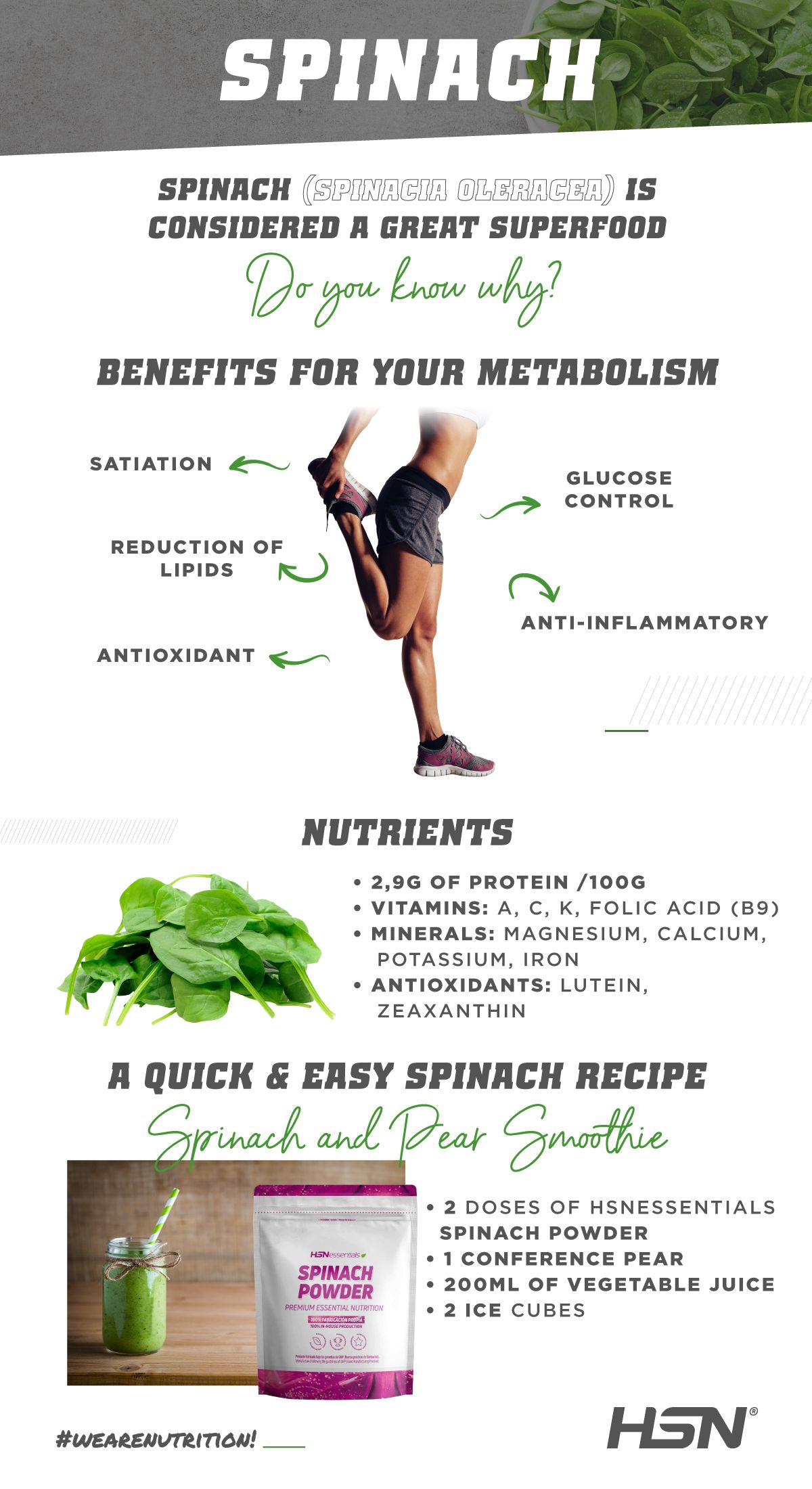 Spinach (Spinacia oleracea L.) is a plant from the Amaranthaceae family, to which also belong other species of widespread use such as beetroot, chard, quinoa and amaranth.

The origin of the plant is oriental, it is believed to have originated in Persia (Iran), although its consumption has spread throughout the east and west, where it has now established itself as a food that we can find in any supermarket. 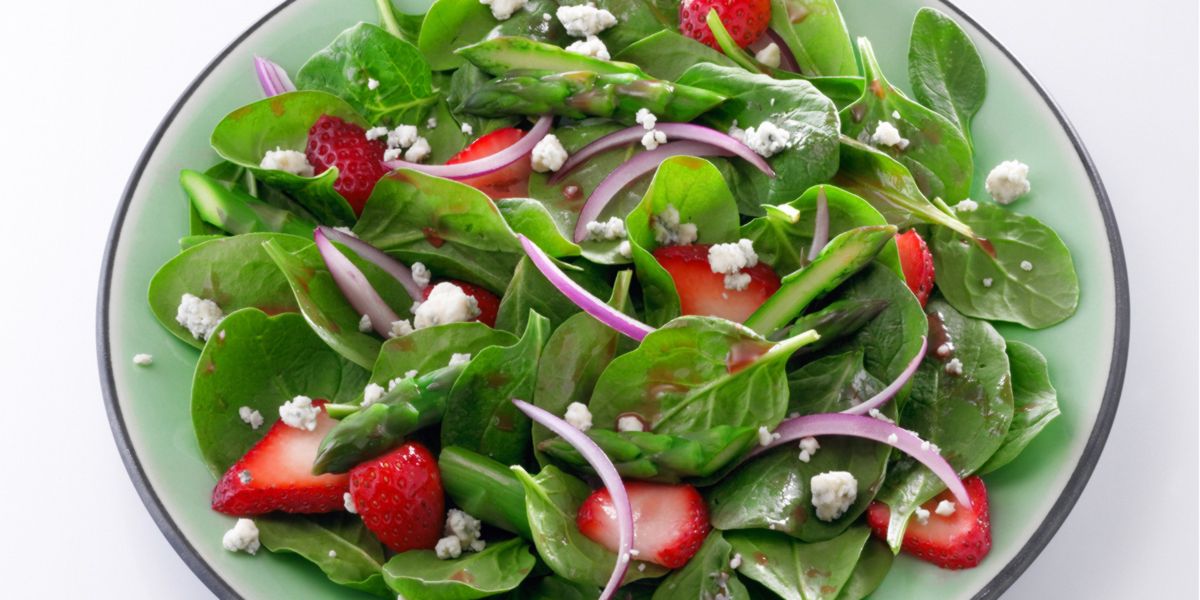 What properties does Spinach have?

Spinach was made famous by “Popeye the Sailor”, an animated character of American origin who ate spinach as an energy source, a food that gave him unrivalled strength. 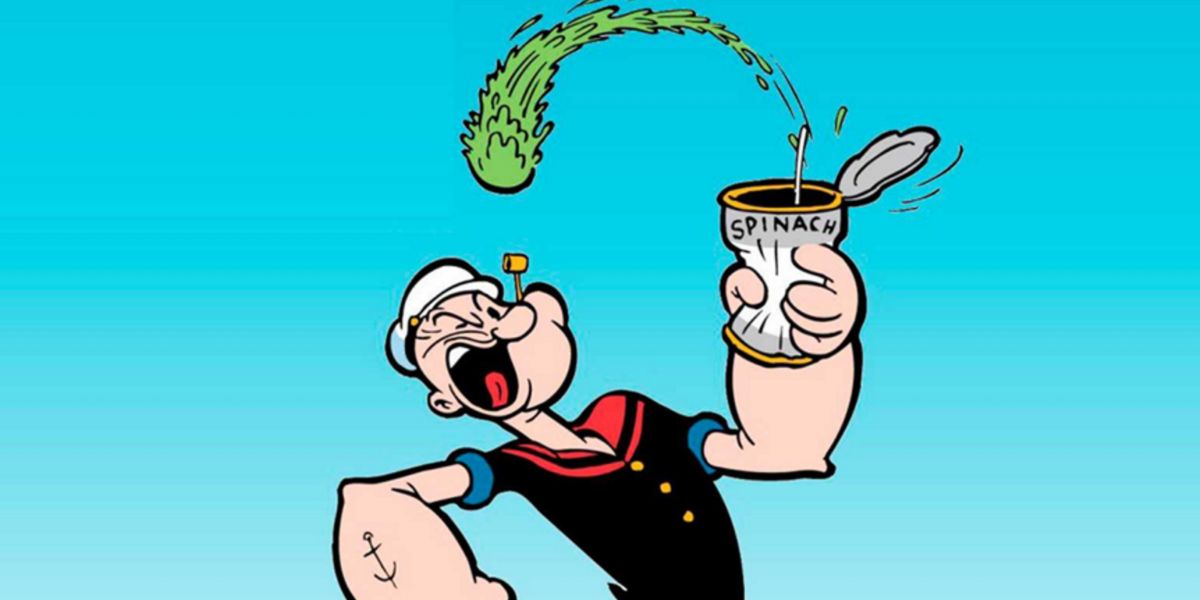 The reason that led Segar (the character’s creator) to choose spinach and not another food was “its high vitamin A content”, but the benefits do not stop there.

Spinach leaves are one of the well-known dark green leafy vegetables, which are the main source of vitamin K in any Western diet.

It is characterised by being a food with a very high water content (>90%), and yet it already has large amounts of vitamins, minerals and other phytonutrients.

When it is dried in the processing for powder presentation, this water is removed for the most part, allowing the compounds naturally present in the leaves to concentrate.

Hence comes the association between spinach and iron as an incredible source of dietary iron, when the reality is that…

🌿Spinach is a great source of iron, right?⁣ ⁣ ❌No, not really.⁣ ⁣ 📜This belief originates from the late 19th and early 20th century. The earliest report was published in 1871 and stated that spinach was relatively high in iron. ⁣ ⁣ 🤔However, it was not clear whether dried of fresh spinach was used in these early reports. A report in 1936 stated that fresh spinach should be used for the determination of iron content instead of dried ⁣spinach, because drying of the samples interferes with the analysis. ⁣ ⁣ 📊The iron content of fresh spinach is now set at around 2-4 mg per 100 g, while dried spinach has about 20-40 mg per 100 g (10-fold difference!).⁣ ⁣ 🌱In addition, there are two forms of iron: heme and non-heme (this was not known in 1871). Iron in plant-based products is typically non-heme iron, which has poor absorption in the small intestine.⁣ ⁣ 🥩In contrast, animal-based sources typically contain heme iron that is much better absorbed.⁣ ⁣ 🔍It has also been suggested that the high reported iron content in spinach was simply the result from an incorrect placed decimal, which overestimated the iron content by ten-fold. However, there is no evidence for this mistake.⁣ ⁣ 💡In conclusion, spinach is not a great iron source as often claimed.⁣ ⁣ 💪🏻(fun fact: the creator of Popeye stated that Popeye ate spinach because of the high vitamin A content, not iron).⁣ ⁣ 👆See bio for clickable study reference. ⁣ #popeye #spinach #iron #micronutrients #minerals #popeyearms #ironrichfoods #dieting #vegan #vegetarian #diet #plantbased #plantbaseddiet #vegetables #veggies

…No, spinach is not naturally a high-iron food – this was determined based on concentrations of spinach leaf powder.

In addition, spinach contains a small fraction of lipids, mainly mono- and polyunsaturated (of the omega 3, 6, and 9 series).

In a natural state they contain 2.2g of fibre for every 100g of leaves, so they are a food with high fibre content, given their caloric potential, according to FAO’s bases in Europe.

In addition to other phytochemicals such as carotenoids, among which lutein stands out, and of which spinach is the main dietary source.

And phenolic compounds, among which we find a very wide range of flavonoids. 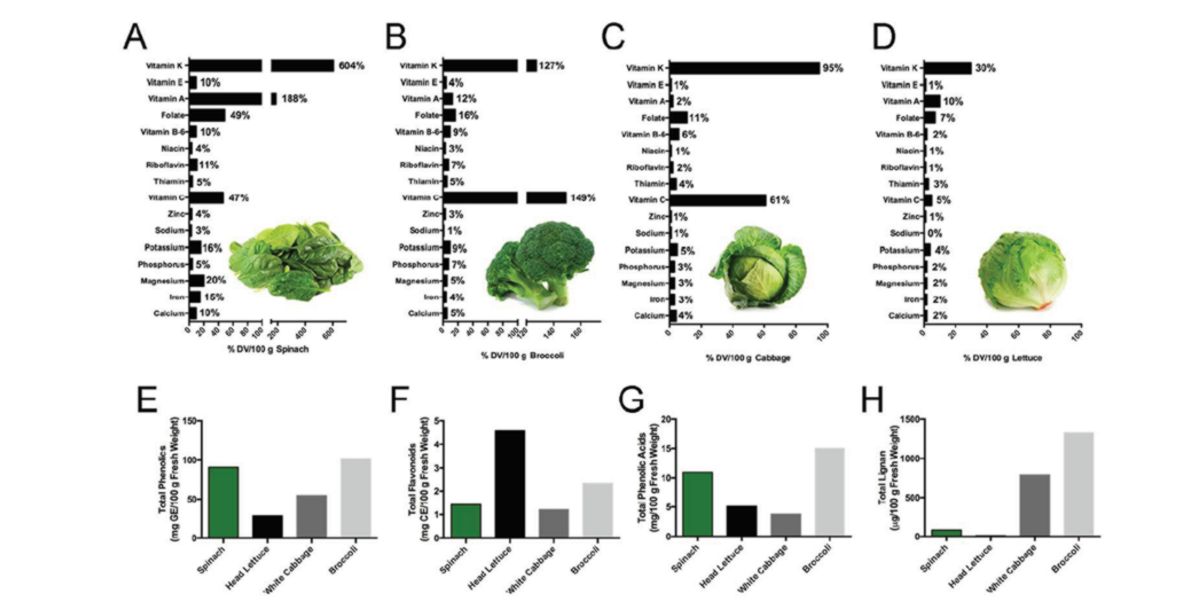 Vitamin and mineral content of spinach, broccoli, cabbage and lettuce (A, B, C and D; respectively), a comparison between the phenols (E), flavonoids (F), phenolic acids (G) and lignin (H) content of these four plants.

In short, a very balanced food, whose nutrient concentrations are strongly conditioned by cultivation, harvesting, processing and cooking factors.

For example (and there are many like this), restriction of exposure to solar UV radiation during growth significantly affects the amount of phenolic acids in spinach.

The same is true with the harvest time, with baby spinach (more tender) less dense in nutrients than spinach at the point of ripening. 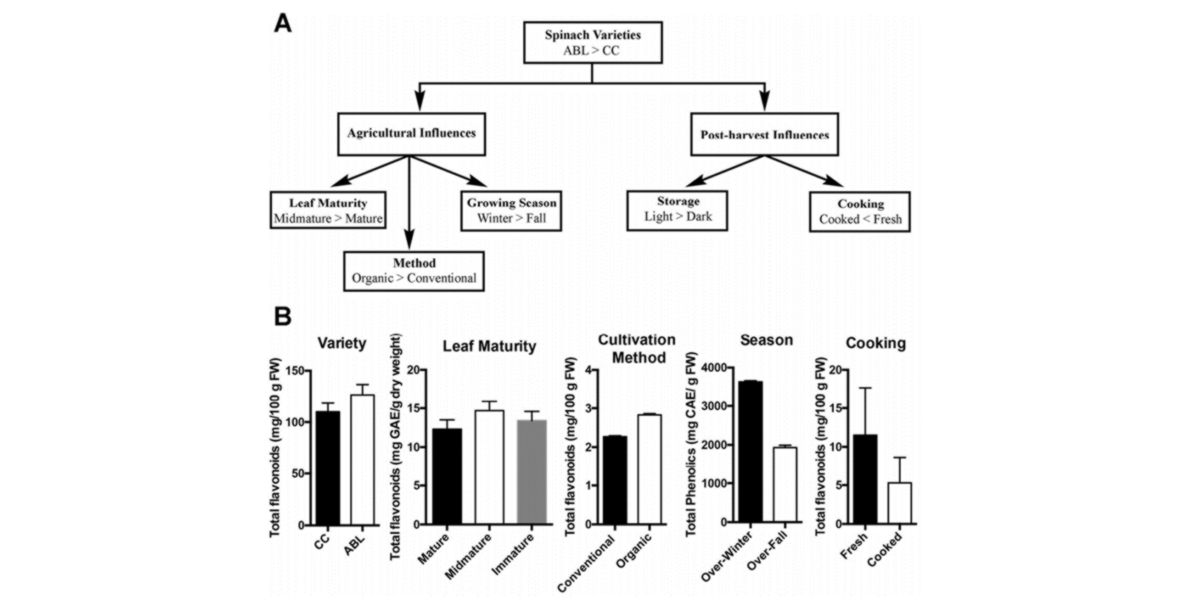 Effects of different variables on the nutritional profile of spinach.

What is Spinach for?

I’m sure you’re not surprised that I’m telling you that there’s an overwhelming amount of medical literature that supports fruit and vegetable consumption to maintain good health, right?

A higher intake of these foods has been associated with: 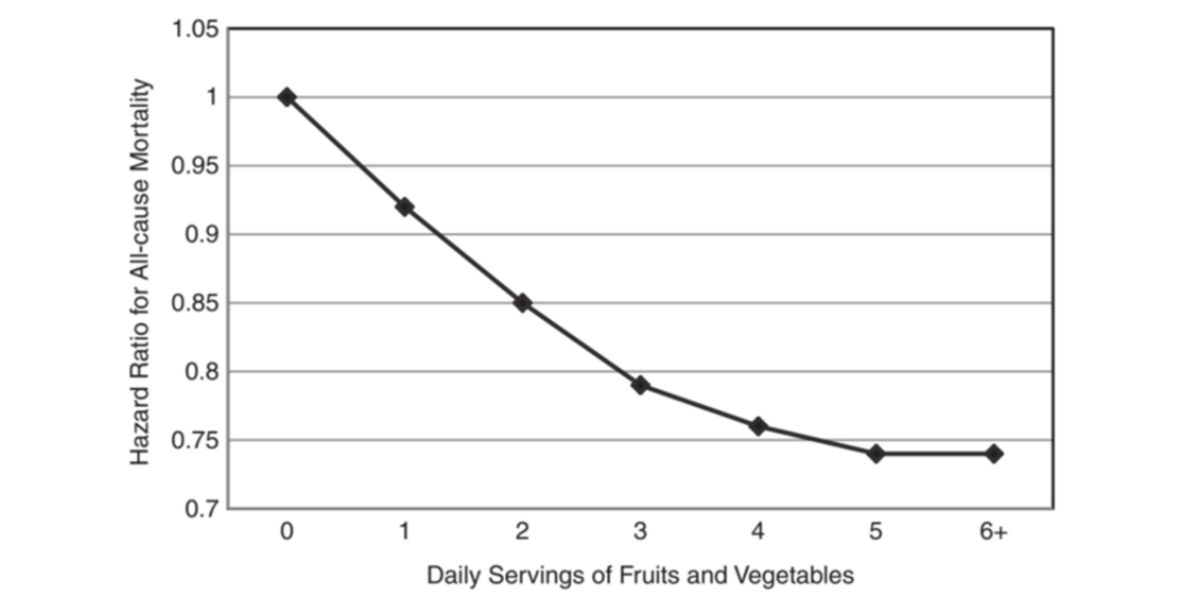 Ratio of daily servings of fruits and vegetables to risk of death from any cause.

In addition, observational studies show an inverse association between the number of servings of fruits and vegetables eaten and the mortality rate.

Thus, for those who do not consume any daily ration of fruit and vegetables, those who consume 5 servings may see their risk of premature death reduced by up to 25%.

Who doesn’t want to take care of themselves a little more, live longer and better? 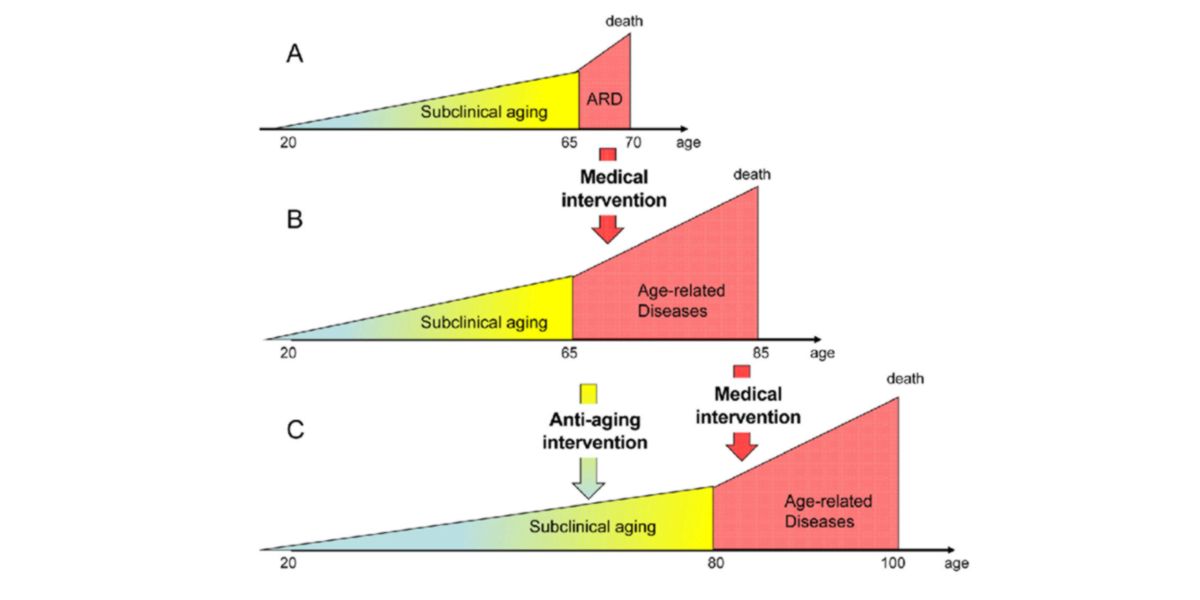 Ageing and longevity. Graph representation of the concept of “healthspan” and “lifespan” as health expectancy and life expectancy, respectively.

Phytonutrients containing spinach leaves have been shown to have positive effects on a variety of factors that determine the person’s metabolic health state: 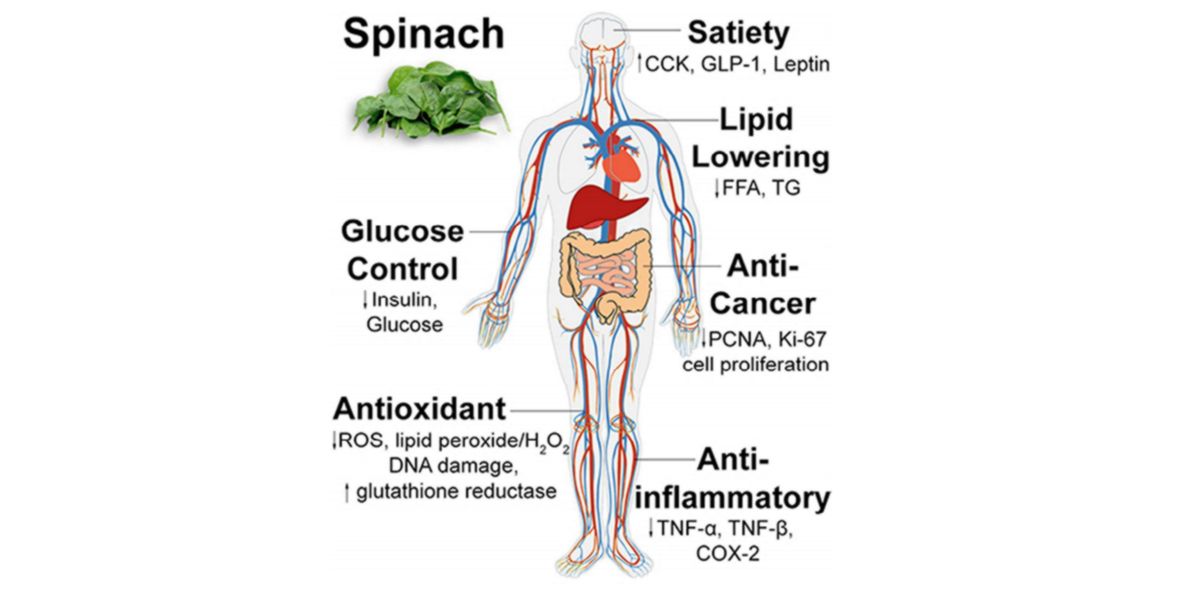 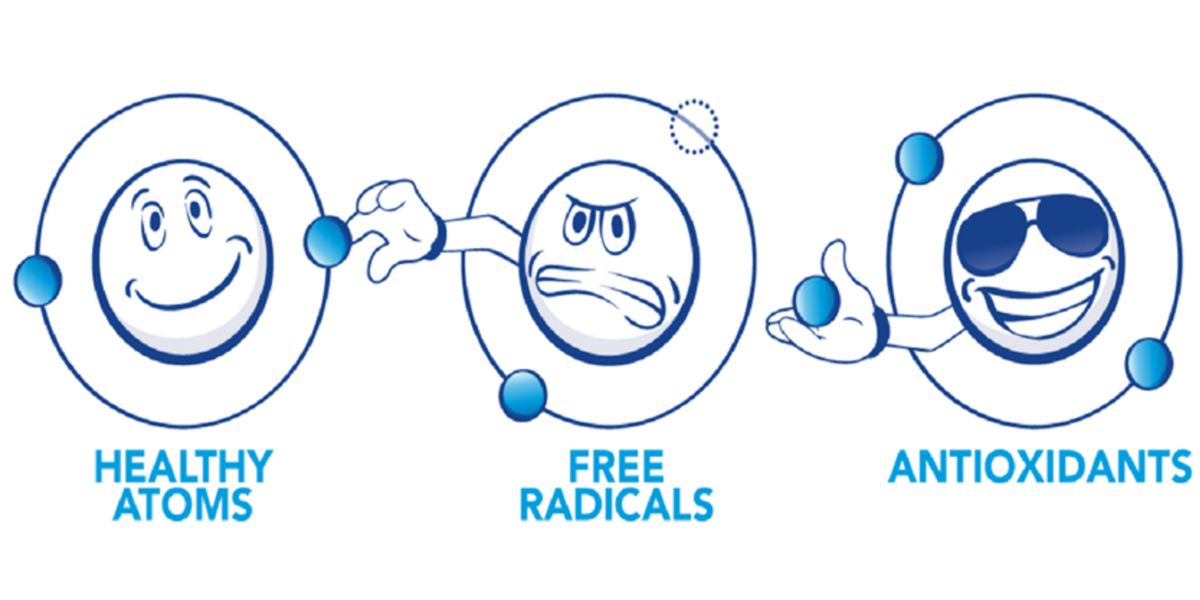 Animated graphic representation of an antioxidant by donating an electron to a reactive oxygen species that can damage a healthy cell. The antioxidant stabilises this molecule.

Second, they can: Modulate the expression of the activity of genes involved in metabolism, cell proliferation, inflammation, and endogenous antioxidant defence.

They can be established as promising mechanisms, for now only demonstrated in vitro and some animal models, to inhibit uncontrolled growth of tumour cells.

They can tackle food anxiety by inducing secretion of short-term satiety-inducing hormones (incretin) such as cholecystoquinine (CCK) and GLP-1. 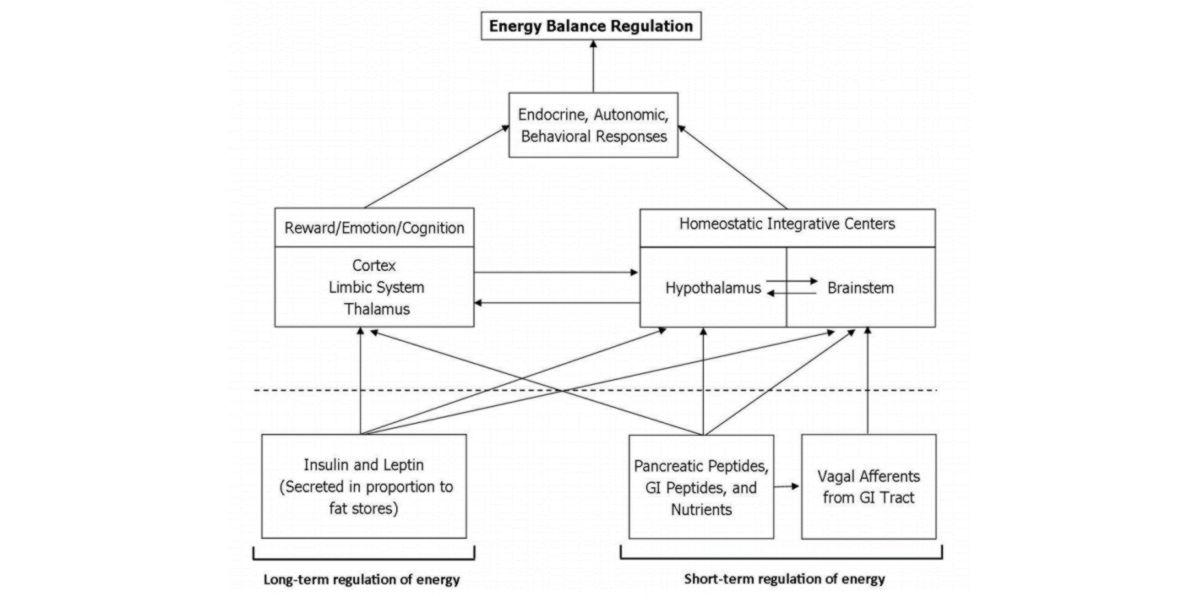 Mechanisms for regulating short- and long-term energy consumption and their interrelationships with different system structures.

In addition to modulating other responses capable of inducing changes in food patterns (increasing satiety), such as leptin, thanks to its thylakoid content. For more information on satiety hormones, visit this link. 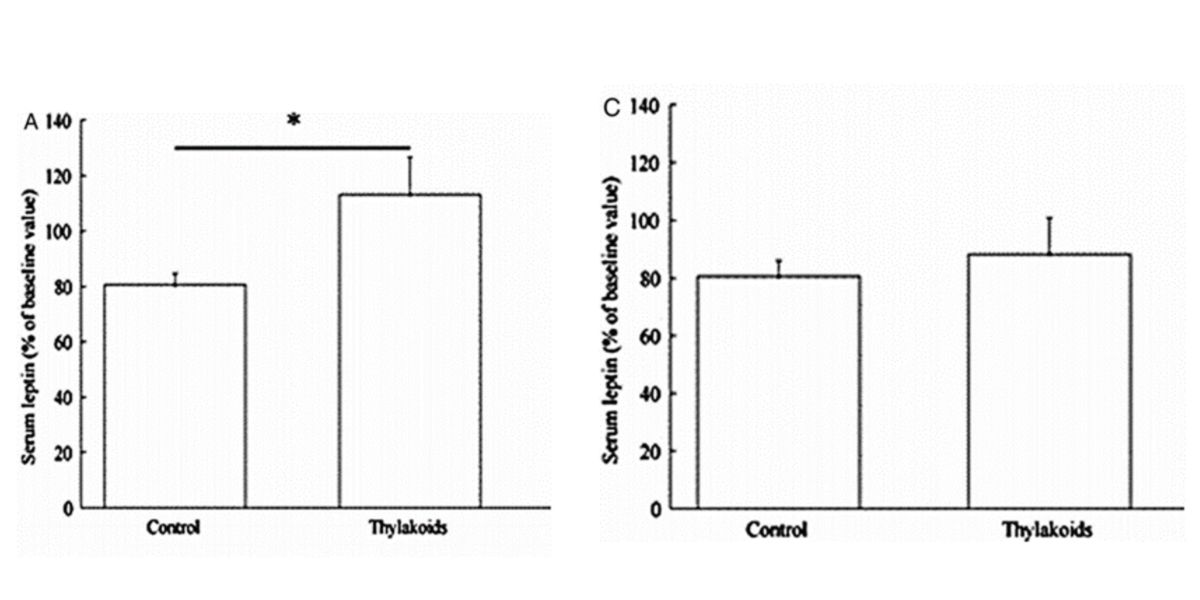 Effects of Thylakoid consumption on serum leptin concentrations. The image on the right is after a non greasy meal.

Thylakoids are chloroplast cell structures, which in turn are an organelle of plant photosynthetic cells.

Even so, the effects on leptin may be mediated by the fat content of food and not so much by thylakoids, we need more information before we can conclude it with certainty. 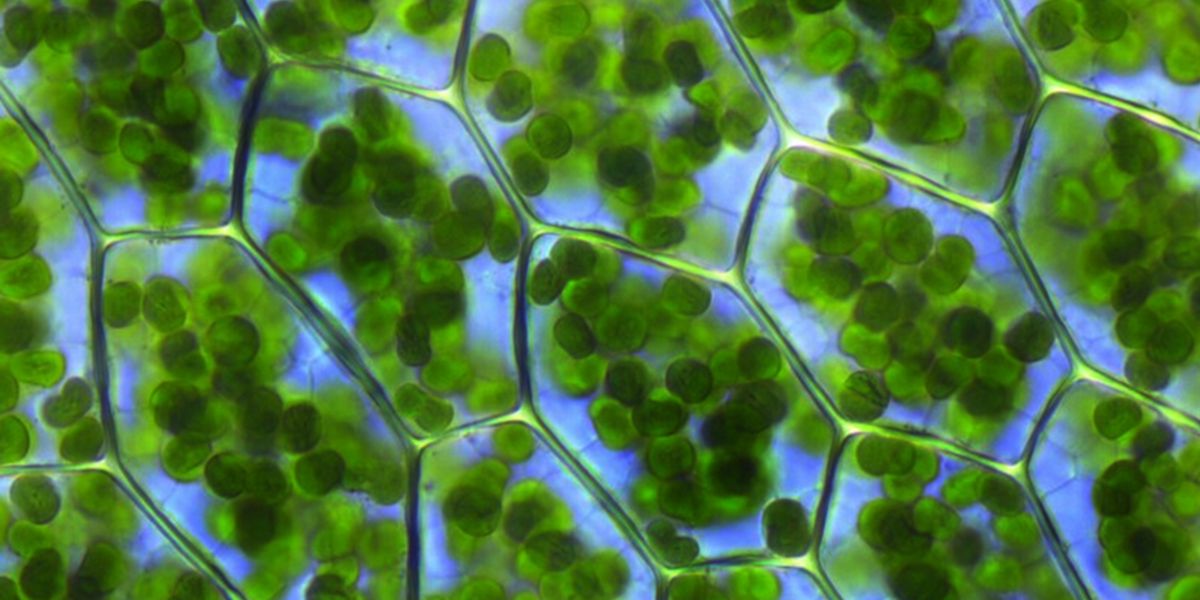 Classic histological arrangement of plant cells in the form of tile. Chloroplasts are green structures.

What we do know is that spinach thylakoids are responsible (at least in part) for their acute satiating effects, so using spinach in the form of smoothie or simply a juice can be a good strategy to cope with the desire to skip the diet during a weight loss and fat loss program. 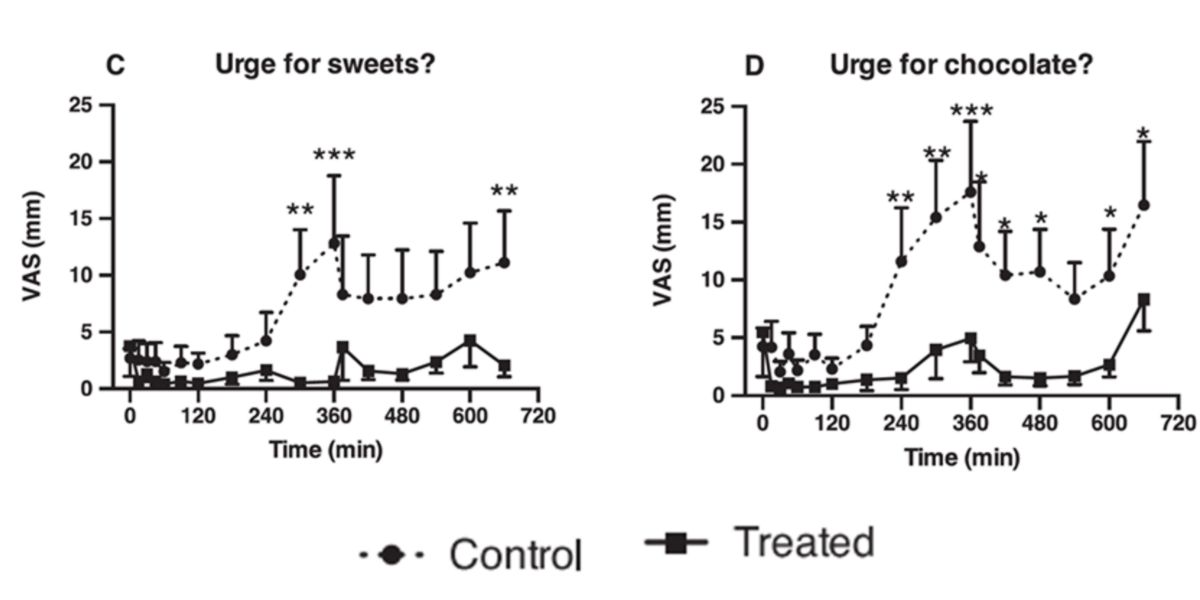 Effects of the consumption of thylakoids of spinach leaves on the desire to eat sweets and chocolates, in front of the group that made the same meal without eating spinach.

Did you know this about Spinach?

It can be used as a possible protector against age-related vision degradation.

Lutein, together with the zeaxanthin, are the two main carotenoids that make up the macular pigment, a structure of our retina. 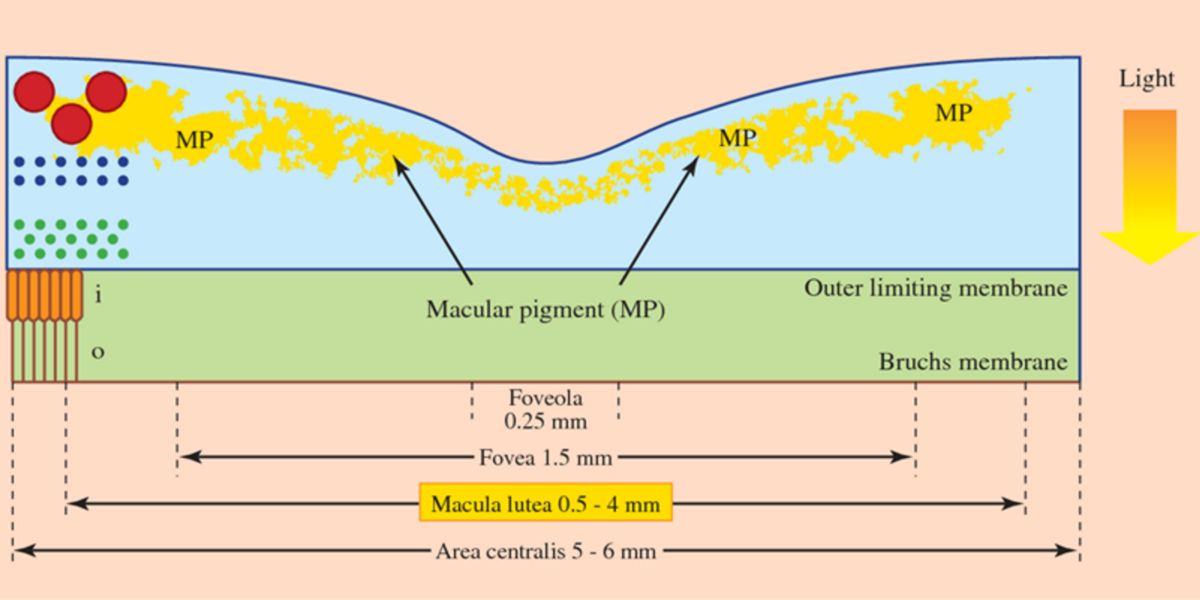 Diagram of the approximate location of macular pigment in the retina.

The objective of this area is to act as a filter to the wavelengths of blue light, maintaining normal and regulated activity of the suprachiasmatic nucleus, protecting the optic nerve from radiation damage and allowing good vision to be maintained over the years. 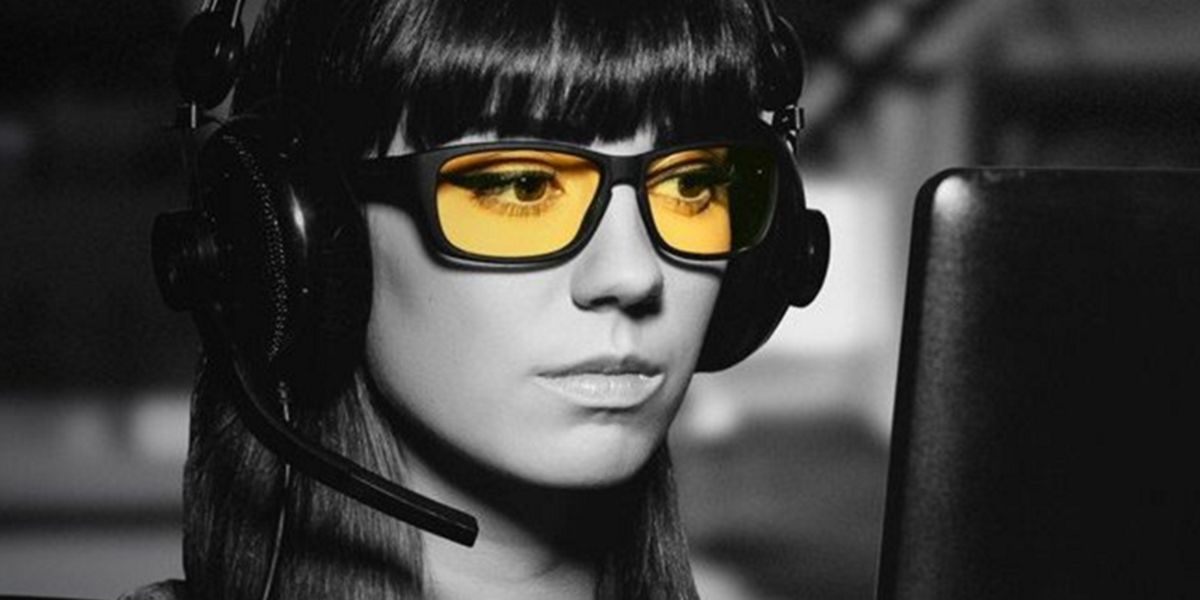 Age, and oxidative stress associated with the passage of time, has been linked to the depletion and decreased density of the carotenoids that make up the macular pigment, leading to the development of the classic age-related maculopathies.

At HSN we were amazed to discover all the properties of spinach leaves, and we set out to find a raw material that met all the characteristics, cultivation, harvesting and processing that determine its maximum nutritional quality.

We found it, and produced our EssentialSeries Spinach Powder, a concentrated version of natural spinach leaves, simply treated by washing, drying and shredding to keep your priorities to the maximum.

Could there be anything easier than increasing your vegetable intake by making delicious, healthy spinach smoothies? We hope you try this.

Science has trolled us by enriching biscuits with spinach, so no recipe you look at will ever seem crazy… 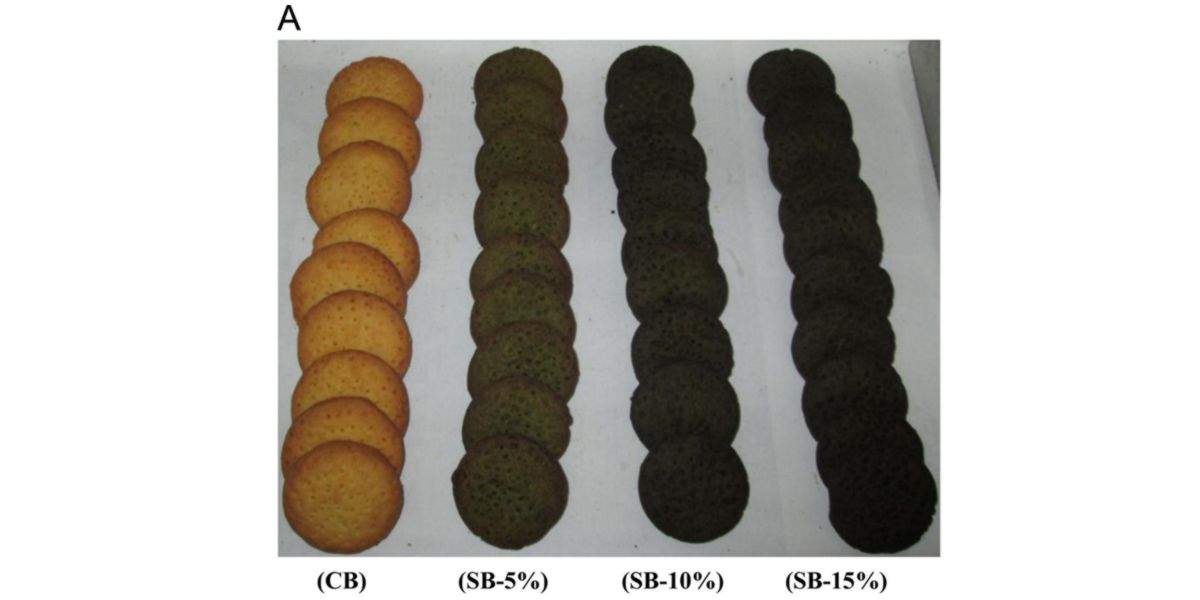 Review of Spinach and its Benefits

A specialist in Pathophysiology and biomolecular effects on nutrition and sportive activity who will show you the elaborate world of sports nutrition in his articles, employing a simple and critical writing.
Previous Earthing: Reconnect with the Earth
Next Spinach Smoothie
Related Articles