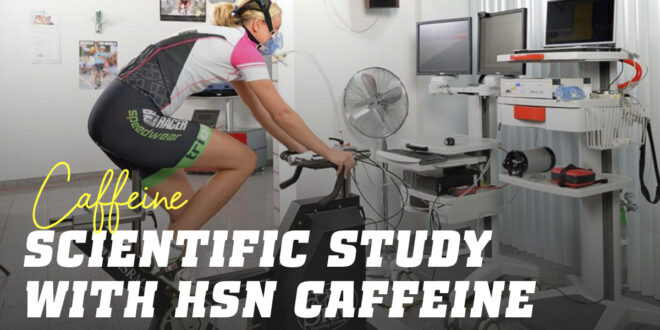 HSN Caffeine Put to the Test

A scientific Study on HSN Caffeine by the University of Granada.

Scientific Study on HSN Caffeine by the University of Granada 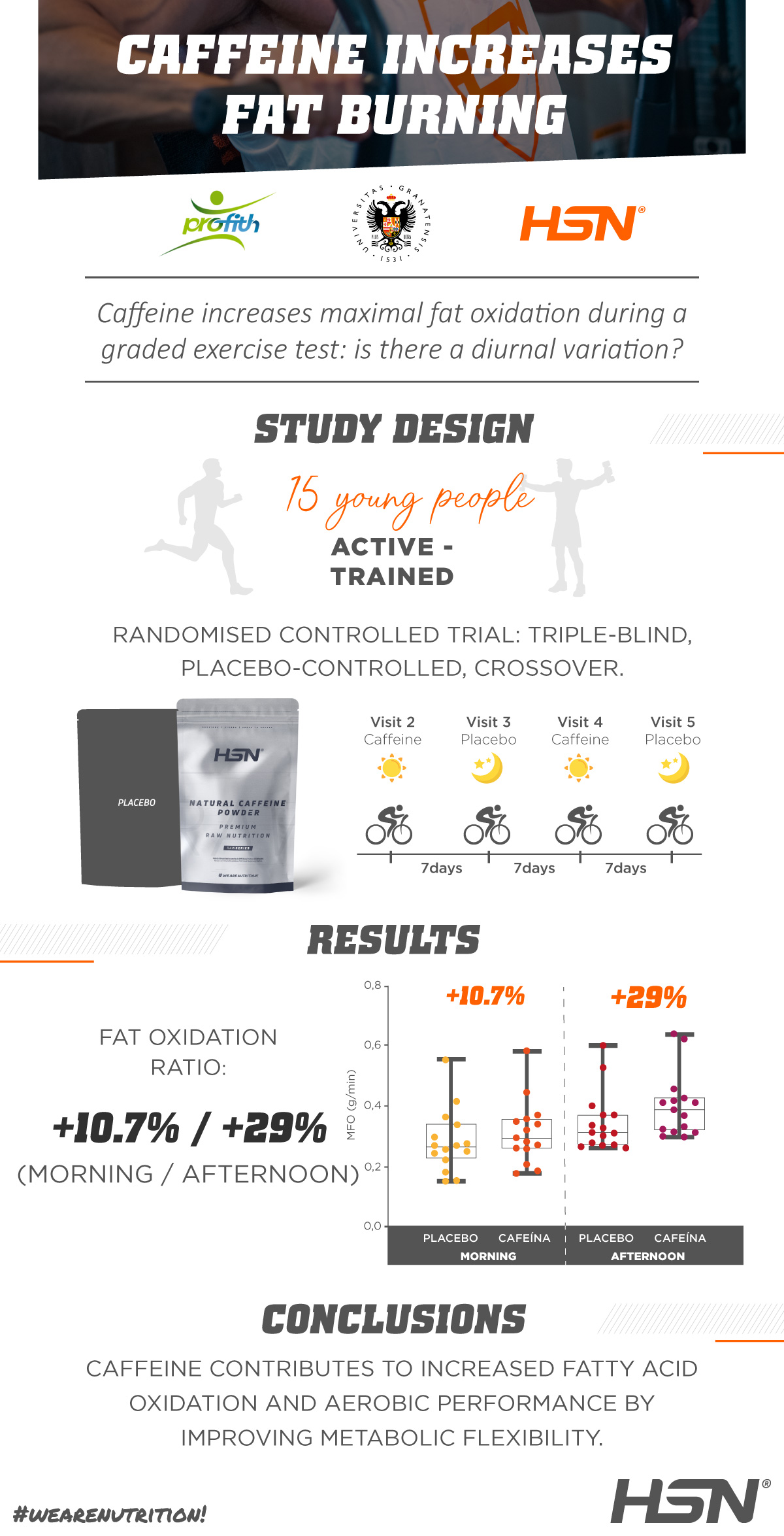 The PROFTH “PROmoting FITness and Health Through Physical Activity” research group, associated with the University of Granada, has carried out a randomised controlled trial to determine the effects of caffeine intake on diurnal variation in fatty acid oxidation. 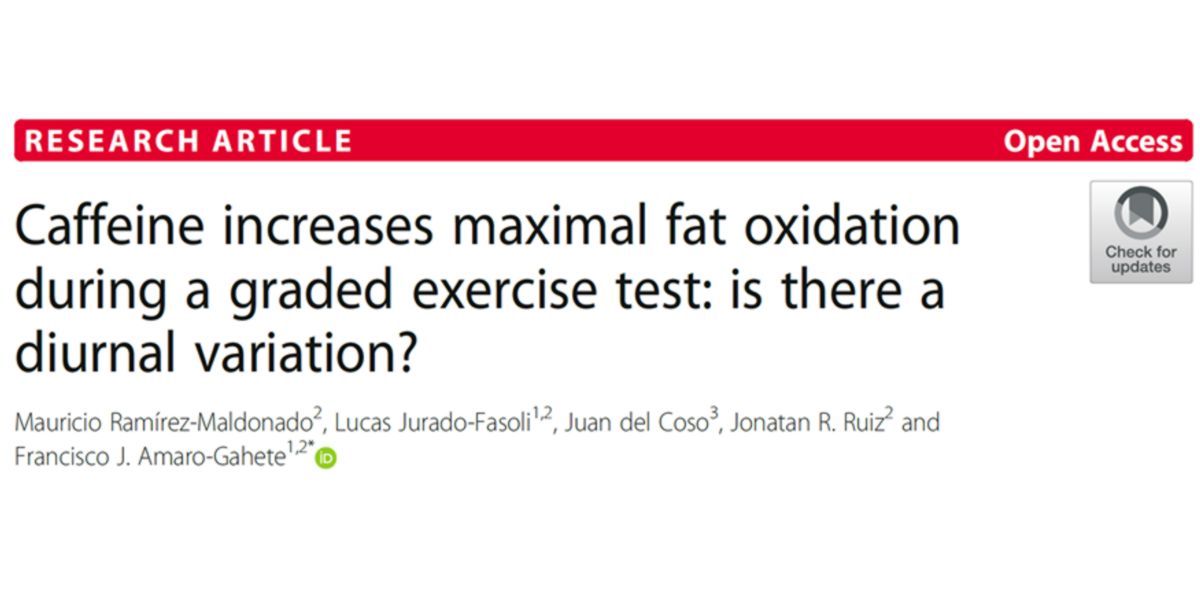 Title and authors of the study using HSN caffeine.

In other words, the hypotheses to be tested were: 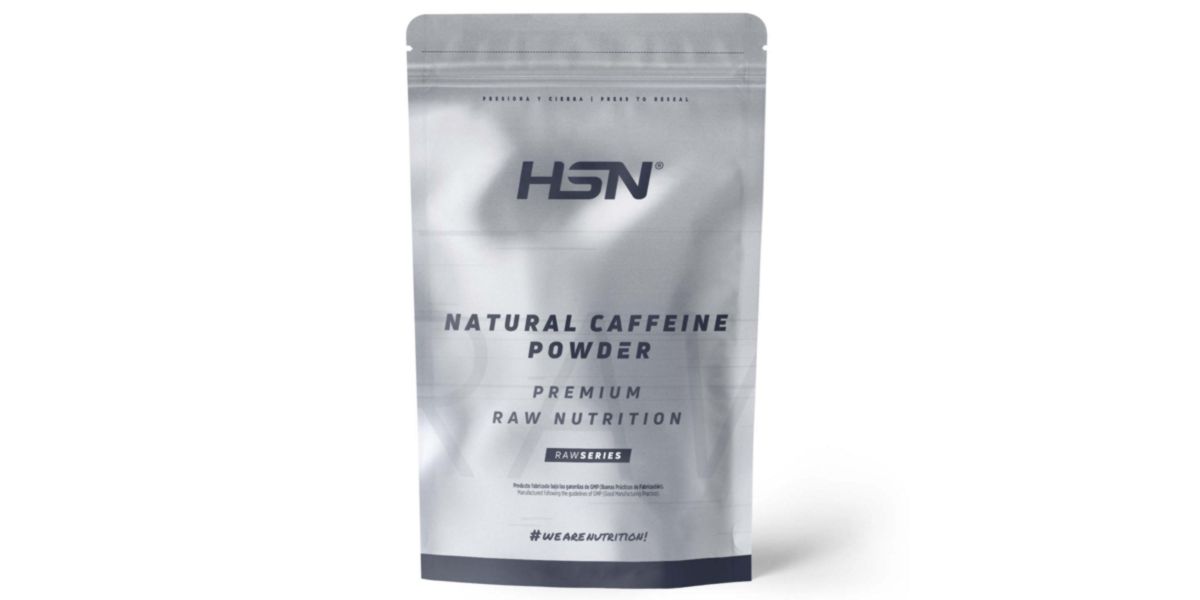 The study used HSN caffeine in anhydrous powder from green coffee beans to test the hypothesis.

We tell you absolutely everything you need to know about Caffeine in this Post.

The study has the following methodological characteristics that allow any type of bias due to lack of knowledge or interests to be controlled, guaranteeing that, in this way, they do not exist.

The study has a triple-blind methodology (subjects, researchers and statisticians), i.e. no one knew at any time what product was being given to the subjects, nor to whom the data sent to the mathematicians corresponded.

The study was controlled with placebo:
The trial has was conducted in crossover, i.e. all subjects were tested under both experimental and control circumstances – everyone was evaluated for: 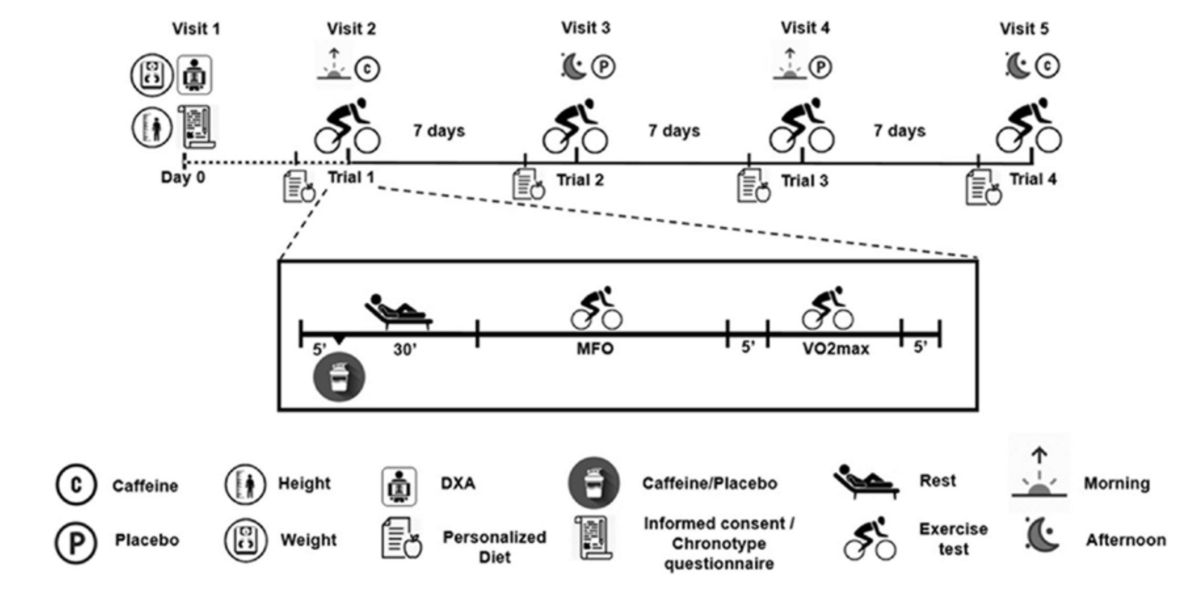 Graphic representation of the study protocol.

It was conducted with 15 active young volunteers with a BMI of 18.5-28 kg/m2 and at least two years of endurance training experience.

They could not be used to caffeine consumption (<50mg/day), nor smokers, nor suffer from caffeine allergies, nor pathologies requiring medical attention.

The study was carried out over 5 visits:

Based on anthropometric data, the amount of caffeine to be used was calculated (3mg/kg body weight).

A first block of graded exercise at submax intensity:

After this, a five minutes rest with free access to water.

A second block of graded exercise at max intensity:
Two tests were conducted during this period:

The results confirmed the hypothesis formulated by the research group:

Subjects had better aerobic performance in the afternoon than in the morning, their fatty acid oxidation was higher, as was the intensity required to reach this point.

This means that in the afternoon, metabolic flexibility is greater, as more fatty acids can be used as an energy substrate, and muscle and liver glycogen can be “protected”, which is highly desirable in endurance athletes.

In terms of caffeine, the results were positive in the 3 variables evaluated: 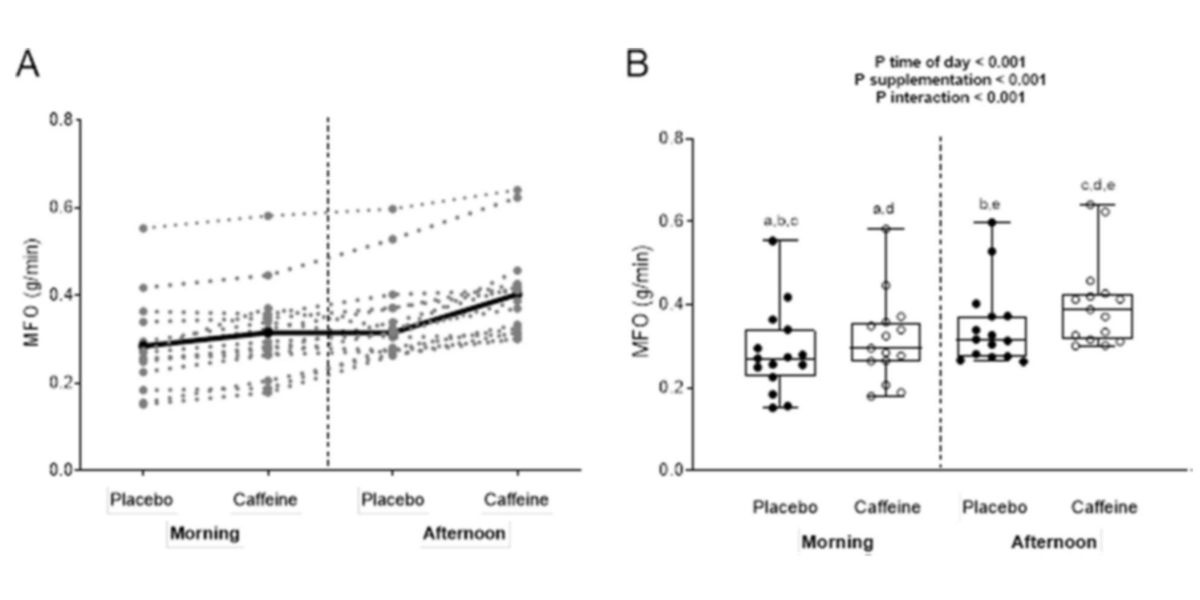 Variations in the rate of fat oxidation across the morning and afternoon, with placebo and caffeine

Caffeine increased the peak intensity at which the maximum fat oxidation rate is reached by 11.1% in the morning and 13.1% in the afternoon (P= 0.0058). 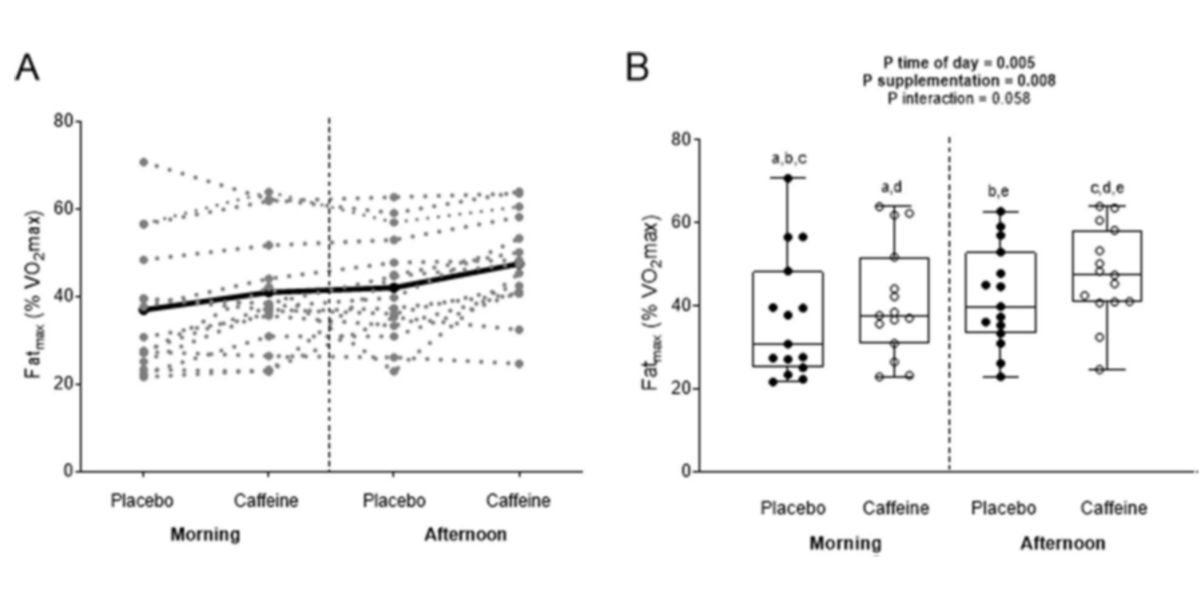 Variations in intensity to achieve maximal fat oxidation between morning and afternoon, with placebo and caffeine. 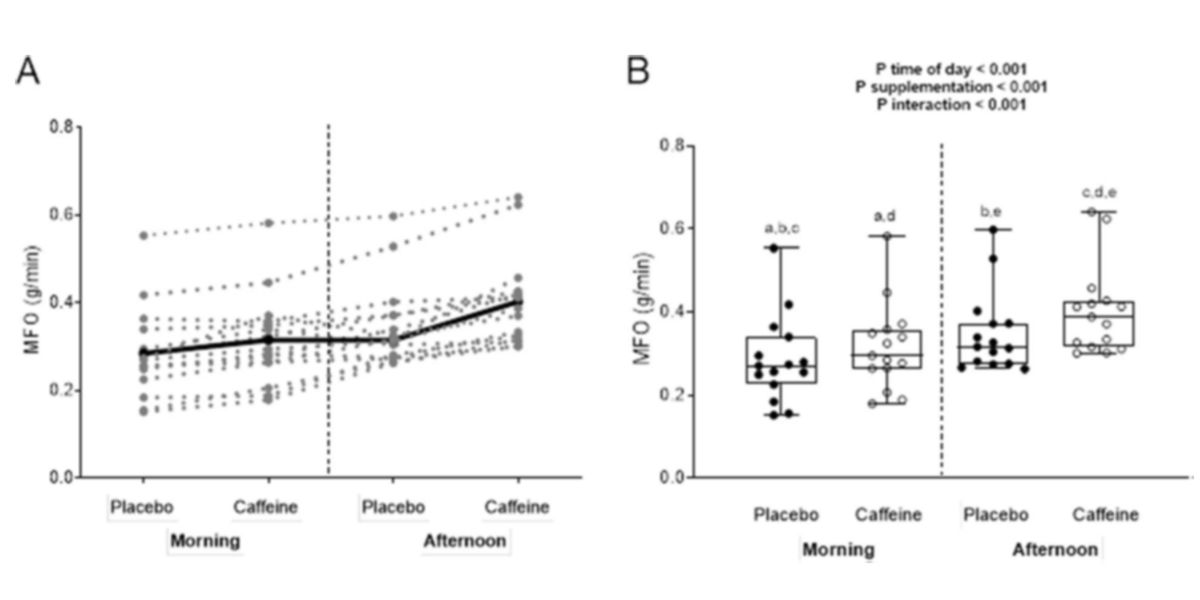 Variations in peak oxygen uptake between morning and afternoon, with placebo and caffeine.

All data show a positive trend for caffeine intake versus placebo, although due to the variability of the individual response to caffeine (encoded by cytochrome P450 genes), only the fatty acid oxidation ratio was statistically significant.

The conclusions of the study were: 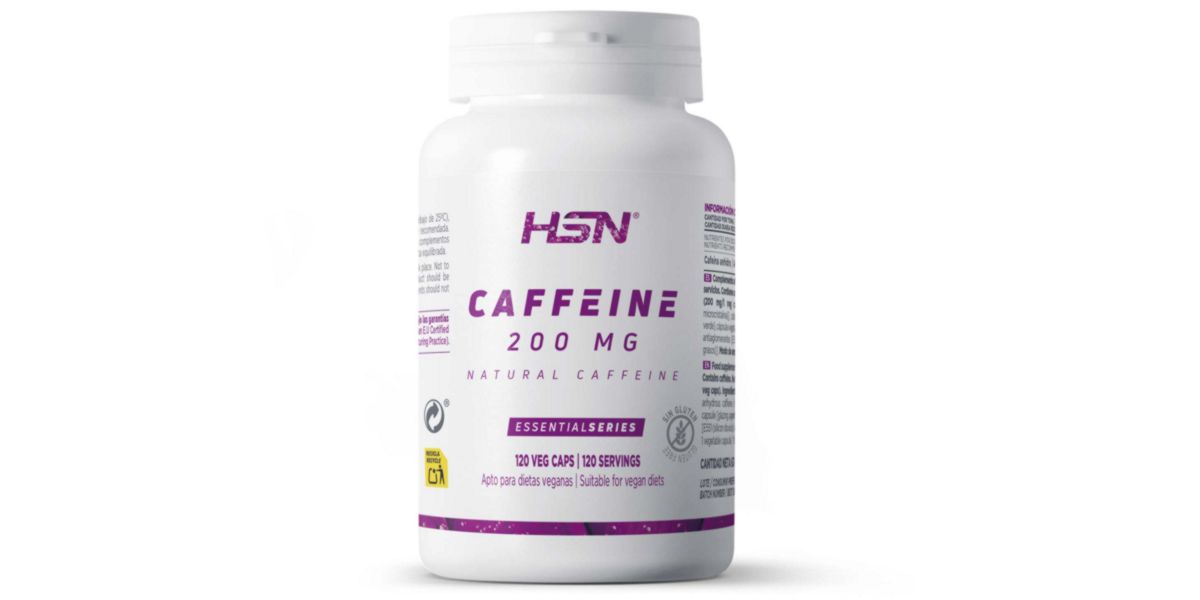 We also have Caffeine in vegetable capsules from EssentialSeries.

Now in a simplified format:

If you’re looking to oxidise more fat, it’s best to do your aerobic exercise in the afternoon, and in any case, caffeine intake will help you “burn more fat”

This has a positive effect (or desirable) on two aspects:

At HSN we are committed to scientific research as the most objective, safe and appropriate means of obtaining knowledge.

Our dietary supplements are developed following maximum quality standards in the production process, certified and audited by multiple independent bodies at different points, and relating to different levels of this.

This is why the results of using our caffeine are positive, because the purity of the caffeine we sell, as well as that of other dietary supplements, is at its highest.

The authors declare that they have no conflicts of interest and that the results of the study have been presented clearly, honestly and without fabrication, falsification or inappropriate manipulation of data.

HSN only provided technical support as a distributor of the dietary supplement used, and was not involved in subject selection, experimentation, data collection, data processing or interpretation.

He is a specialist in metabolic physiopathology training and in the biomolecular effects of food and physical exercise.
Previous The Importance of Postural Exercises in the Office
Next Oat Pancakes with Mascarpone Cheese
Related Articles 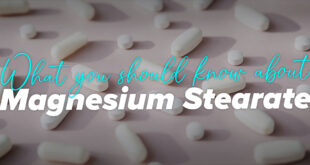 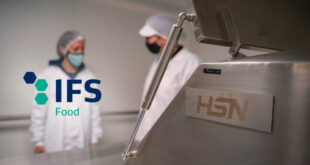 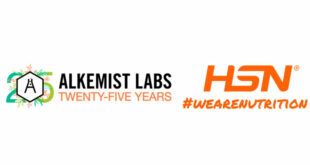 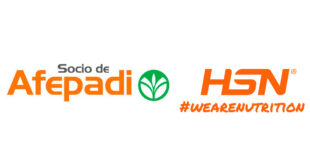