(737)
TOP sales
HSNE-CAFF 5060326271251 https://www.hsnstore.eu/media/catalog/product/n/a/natural-caffeine-200mg-vcaps-hsn_1.jpg
HSN Sport Nutrition and Natural Dietetics
EUR 2025-08-31 00:00:00 NATURAL CAFFEINE 200mg 2.94
One of my indispensable supplements for strong days or with more fatigue. It works and it is noticeable when training, especially if you are not used to this amount of caffeine.
Garooi

In stock. Immediate delivery.
Temporarily out of stock
Warning about our product information
Warning about our product information
Attention: The information shown on the website about composition and nutritional information is based on specific production batches. There may be slight differences between the product labelling and the information shown on the website, due to labelling updates.
These variations are minimal and always below the recommended tolerance ranges for food, which are detailed in the following European Commission document on the matter: GUIDELINE DOCUMENT FOR COMPETENT AUTHORITIES IN THE FIELD OF COMPLIANCE CONTROL WITH EU LEGISLATION
Caffeine extracted from Green Coffee in capsules. 200mg per serving. With pantothenic acid and vitamin B6. High concentration and potency. Suitable for vegans.
Need an energy boost in your sport? Recover with Natural Caffeine. Vegan product. Maximum effectiveness. Delivery in 3-5 working days.
View more details
Watch video

The University of Granada has used HSN's natural caffeine in scientific studies with positive results. 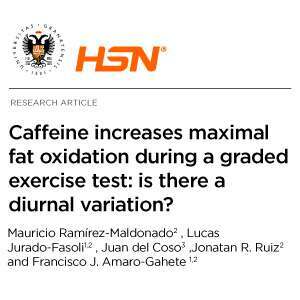 What is Natural Caffeine 200mg?

Natural Caffeine 200mg by EssentialSeries is a vegan food supplement in capsules, based on caffeine extracted from the unroasted beans of Coffea arabica (Green coffee).

Caffeine is present in and extracted from various plant sources found in nature, especially coffee and tea

We have also supplemented the formula of this product with Pantothenic Acid and Vitamin B6.

HSN has collaborated as a technical support company with the research group PROFITH ('PROmoting FITness and Health Through Physical Activity') in the development of its randomised clinical trial (RCT), which can be read in full and free of charge.

The study evaluates, in humans, by means of a crossover design,placebo-controlled, triple-blind, the functional effects of caffeine, and has used HSN's natural caffeine for its high degree of purity.

We are pleased to announce the positive results obtained by the research group associated with the University of Granada, using our caffeine.

From HSN will continue to support scientific knowledge as a means of acquiring knowledge of the highest and most rigorous quality.

Caffeine is a widely used supplement, especially in capsule form for its convenient dosage.

With natural caffeine 200mg you have a more convenient product, 200mg of guaranteed active ingredient per capsule, so you don't have to worry about dosing the pure powder:

Natural Caffeine 200mg is ideal to carry around and take as a pre-workout anytime, anywhere.

While this method of development is safe and the compound obtained is equally effective, many people prefer to use caffeine anhydrous from natural sources.

Unlike other caffeine capsules, natural caffeine 200mg by EssentialSeries is suitable for vegan diets.

The capsules have been developed using hypromellose, a vegetable polymer, rather than the classic animal gelatine capsules.

Which products should Natural Caffeine 200mg by EssentialSeries be combined with?

It is usually combined with other food supplements such as:

Did you know that there is already a food supplement containing both compounds? Smart Caffeine.

2 At a dose of 3mg/kg body weight, one hour before exercise.

3 At a dose of 4mg/kg body weight, one hour before exercise.

Once opened, store in a cool (under 25ºC), dry and dark place. Do not exceed the stated recommended daily dose. Keep out of reach of the smallest children. Nutritional supplements should not be used to replace a balanced diet. It contains caffeine (200mg/1 veg caps). Not recommended for children nor pregnant or nursing mothers.

Once opened, store in a cool (under 25ºC), dry and dark place. Do not exceed the stated recommended daily dose. Keep out of reach of the smallest children. Nutritional supplements should not be used to replace a balanced diet. It contains caffeine (200mg/1 veg caps). Not recommended for children nor pregnant or nursing mothers.
How to take

Questions
DO YOU HAVE ANY QUESTION ABOUT THIS PRODUCT? DON'T HESITATE TO ASK US!
Question about: NATURAL CAFFEINE 200mg
Log in and ask
CUSTOMER REVIEWS

You notice its effect soon after taking it. Recommended to replace the dose of coffee that some of us need.

As the weeks go by, you will see the effects of caffeine slow down when taking it.