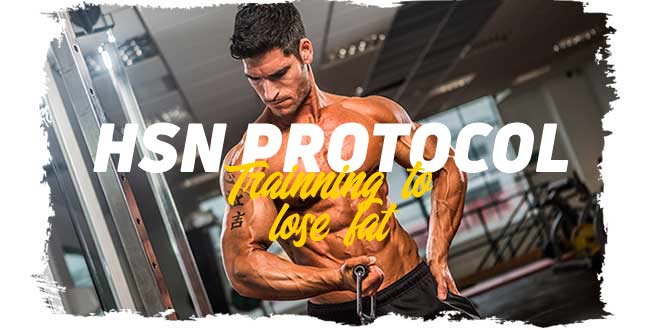 After the HSN Protocol To Lose Fat Without Compromising the Performance focused on nutrition, it is time for the Routine to Lose Fat

If there is a series of articles that has made history in this blog, it would be the HSN protocol to smash fat by Sergio Espinar.

The last post of this series was an example of a weekly diet that follows said fat-burning protocol.

Today, we will start a new series along with the HSN protocol and diet by Sergio, since some of you have been asking for it. Here you have an entertaining routine with protocol models exclusively.

It will be made up by 16 weeks in which we will do a typical periodization, based on routines like chest-leg, full body, partial strength, advanced methods, FST and metabolic method (I suggest reading the Beatman Performance Training if you are curious).

The distribution of the first two training weeks consists of combining it with the different fat-burning protocol models:

Training routine for week 1 and 2

We are going to do a typical 4-days chest-leg routine for the first two weeks. Moreover, we will use some auxiliary exercises to enhance the biceps and triceps work, apart from doing plenty of basic exercises. This is something that some of you have suggested in other routines.

Moreover, we have also added a special metabolic training day in the middle of the routine, done by our colleague Javier Colomer, also known as Beatman. It is not quite demanding yet, but it will give you an idea of how this type of training works in a cardio exercise session.

Do not forget that you can ask us any question in the comments below. But avoid writing on the diet posts to avoid mixing concepts. Likewise, if you have any doubt about the diet write to us in the comments of the corresponding posts, so that my colleagues will be able to red your comments and help you as best as they can.

Not compromise the performance - 100%

David Díaz Gil contributes with excellent articles in which he deposits the essence of his experience as well as scientific rigor.
@EnformaAlos40
Previous Women’s Routine: BPT Woman. Week 1
Next Express definition training (I)
Related Articles