In stock. Immediate delivery.
Temporarily out of stock
Warning about our product information
Warning about our product information
Attention: The information shown on the website about composition and nutritional information is based on specific production batches. There may be slight differences between the product labelling and the information shown on the website, due to labelling updates.
These variations are minimal and always below the recommended tolerance ranges for food, which are detailed in the following European Commission document on the matter: GUIDELINE DOCUMENT FOR COMPETENT AUTHORITIES IN THE FIELD OF COMPLIANCE CONTROL WITH EU LEGISLATION
1000mg of Spirulina platensis per capsule. Non-GMO. Suitable for vegetarians and vegans.
Need a low-fat, cholesterol-free source of protein? Buy EssentialSeries Spirulina, suitable for vegans. 3-5 working days delivery.
View more details

Spirulina 1000mg by EssentialSeries is a food supplement in vegetable capsules made from the Arthrospira platensis algae.

'Spirulina is a blue-green, multicellular, filamentous algae that has gained considerable popularity in the food industry and is growing as a food supplement [...] It grows in water and can be easily harvested and processed' (FAO, 2008).

Spirulina 1000mg is 100% suitable for vegetarians and vegans, as it doesn't contain any animal ingredients in its composition.

Because, as the Food and Agriculture Organisation of the United Nations states:

'Spirulina has a high content of high-quality protein (59-65%), which is more than other commonly used plant sources [...]. A special value of spirulina is that it is easily digested due to the absence of cellulose in its cell walls' (2008).

'They make it a low-fat, low-calorie and cholesterol-free source of protein' (2008).

Spirulina can occur in the form of Arthrospira platensis or Arthrospira maxima, however, as noted by FAO:

'Arthrospira platensis is the most common and widely available spirulina, and the one with the most published research and public health decisions towards this specific species' (2008).

We have chosen this algae species because it has the most support from authoritative research bodies in the field of food science and technology, dietetics and human nutrition.

Because not all spirulina is the same!

Much of the spirulina on the market is developed in industrial processing and cultivation plants that use genetic engineering to develop genetically modified organisms, a practice that can negatively impact the environment and partially unknown human health (Hilbeck et al., 2015).

As a microbe, spirulina belongs to the 'high risk' risk level group categorised by the American Non-GMO Project.

Our spirulina is 100% free from any kind of development work or genetic modification.

Spirulina is a structure of the cyanobacteria phylum and is therefore not a sentient organism and as such is not excluded from a vegetarian or vegan diet.

The capsules have been developed with a vegan coating agent, and not with gelatine as is normally found on the market.

Spirulina 1000mg is 100% suitable for vegetarians and vegans.

Thanks to the high content of our capsules, you only need one capsule a day.

Which products combine Spirulina 1000mg with?

Questions
DO YOU HAVE ANY QUESTION ABOUT THIS PRODUCT? DON'T HESITATE TO ASK US!
Question about: SPIRULINA 1000mg
Log in and ask
CUSTOMER REVIEWS 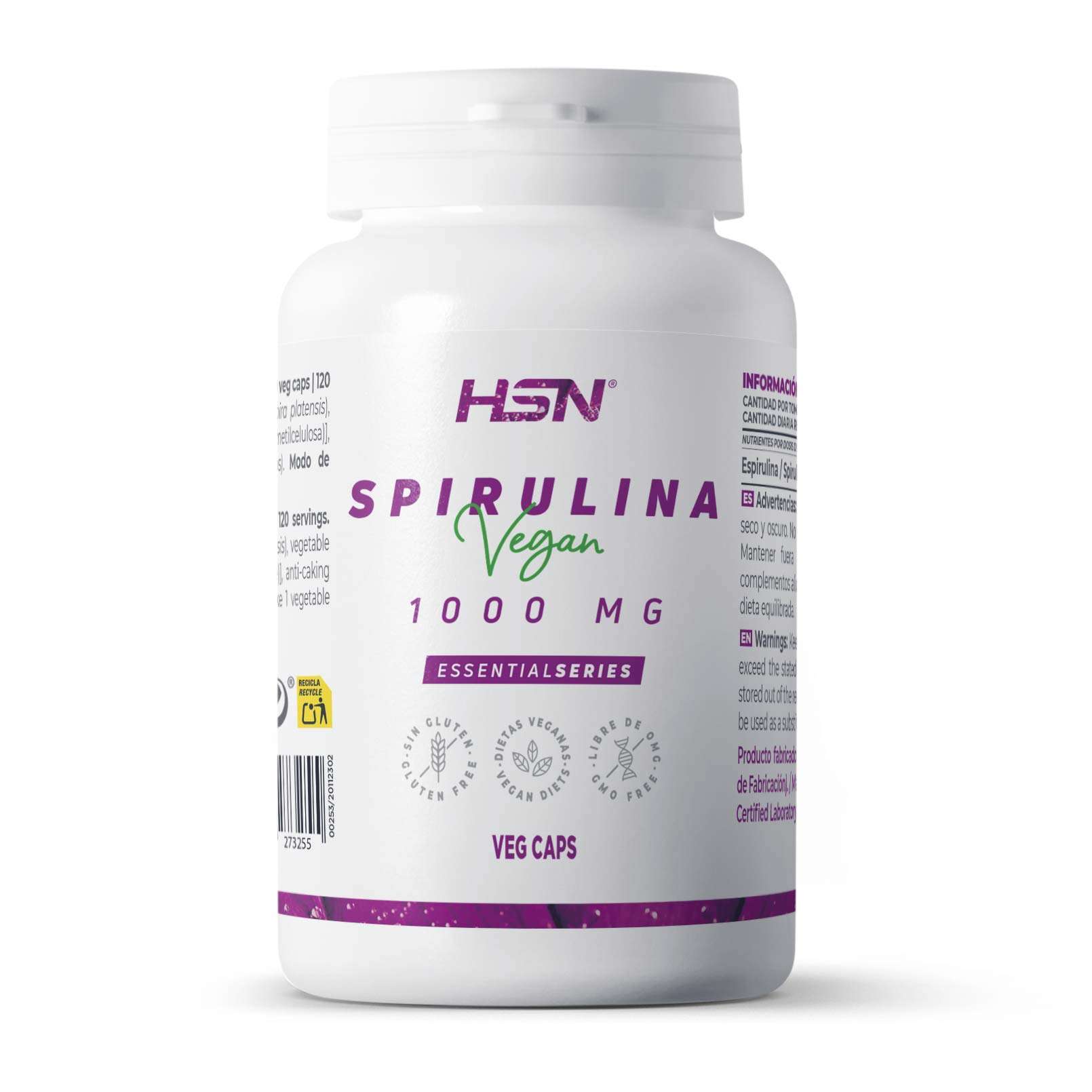 Good supplement of vitamins and antioxidants. It also provides energy. It is a must in my breakfasts.

In my case, I did not notice much effect or any considerable difference while I was taking it.