In stock. Immediate delivery.
Temporarily out of stock
Warning about our product information
Warning about our product information
Attention: The information shown on the website about composition and nutritional information is based on specific production batches. There may be slight differences between the product labelling and the information shown on the website, due to labelling updates.
These variations are minimal and always below the recommended tolerance ranges for food, which are detailed in the following European Commission document on the matter: GUIDELINE DOCUMENT FOR COMPETENT AUTHORITIES IN THE FIELD OF COMPLIANCE CONTROL WITH EU LEGISLATION
400mg CaffXtend® slow release granular caffeine (50% pure caffeine). 200mg of pure caffeine per dosage. Convenient powder format. Suitable for vegans.
Buy HSN slow realease caffeine powder and increase your alertness. Convenient powder format. Suitable for vegans. Hyper-reduced price.
View more details

What is Slow-Release Caffeine Powder?

Slow-release caffeine powder by RawSeries is a dietary supplement based on CaffXtend® (slow-release natural granulated caffeine).

CaffXtend® is a prestigious trademark of the company Inventia Healthcare, known for its granulation system that sustains the release of caffeine.

This is a 100% vegan-friendly product.

Each dose of this dietary supplement contains 400mg of CaffXtend®, meaning it provides 200mg of pure caffeine.

CaffXtend® is unique. It has been developed and manufactured by Inventia Healthcare, a company recognised the world over for its innovative development of this kind of ingredient.

CaffXtend® uses patented technology that allows the caffeine dose to be released over a 12-hour period (according to the company that owns the trademark: Inventia Healthcare Ltd).

CaffXtend® passes through our body in a different manner to immediate-release caffeine.

Thanks to its granulation technology, the caffeine is released over a long period of time. 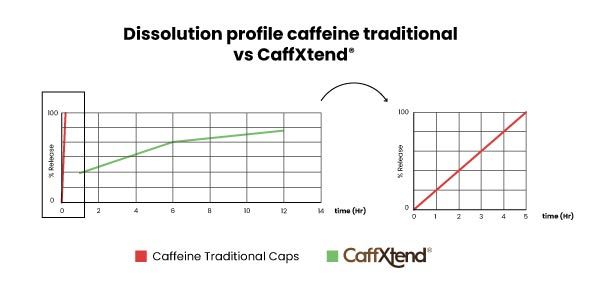 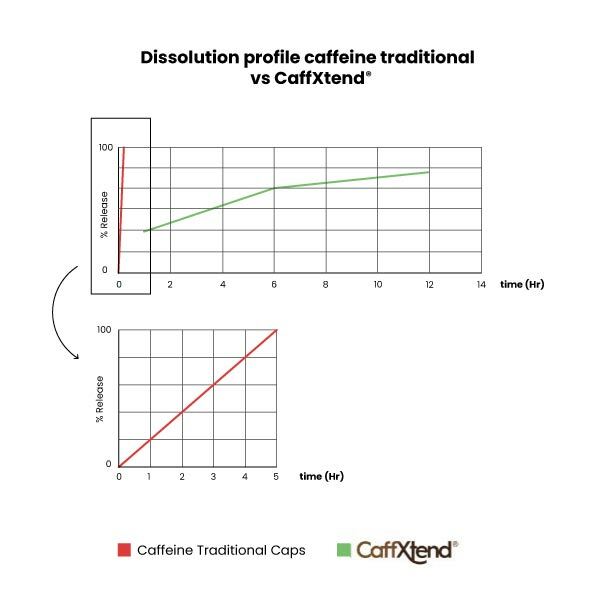 While typical caffeine supplements release more than 95% of their content in the first few minutes, this one does so over 12 hours.

This supplement comes in a super convenient format. All you have to do is mix the powder with water, juice or any drink of your choice.

This supplement is suitable for vegetarian and vegan diets.

How do you take Slow-Release Caffeine Powder?

Bear in mind that as CaffXtend® uses a unique granulation technology it doesn't dissolve in the same manner as other supplements. As such, you might notice a few 'grains' while drinking your preparation.

What can you combine the product with?

How does CaffXtend Caffeine powder taste?

Slow-Release Caffeine Powder has a neutral taste, but if the granules are chewed, an intense bitter taste is perceived. 1 The effect is obtained with an intake of at least 75mg of caffeine.

2 The effect is obtained with an intake of 3mg of caffeine/kg body weight, one hour before exercise. This guidance is aimed at adults carrying out endurance exercise.

3 The effect is obtained with an intake of 4mg of caffeine/kg body weight, one hour before exercise. This guidance is aimed at adults carrying out endurance exercise.

Store in a cool (below 25°C), dry and dark place. Do not exceed the stated recommended daily dose. Keep out of reach of the smallest children. Nutritional supplements should not be used to replace a balanced diet. Not advised for children nor pregnant women. Contains caffeine (200mg/daily dose). Caffxtend® is a registered trademark of Inventia Healthcare Ltd.. The scoop/product quantity equivalences (grams or milligrams) are indicative, as the density of powdered products may vary between flavours and batches. We recommend the use of a kitchen scale in cases where precise dosing is required.
How to take

Questions
DO YOU HAVE ANY QUESTION ABOUT THIS PRODUCT? DON'T HESITATE TO ASK US!
Question about: SLOW RELEASE CAFFEINE (400mg CaffXtend®) POWDER
Log in and ask
CUSTOMER REVIEWS