Full Box (3 Units) The Unit costs 3.83€ You save 0.50€*
Warning about our product information
Attention: The information shown on the website about composition and nutritional information is based on specific production batches. There may be slight differences between the product labelling and the information shown on the website, due to labelling updates.
These variations are minimal and always below the recommended tolerance ranges for food, which are detailed in the following European Commission document on the matter: GUIDELINE DOCUMENT FOR COMPETENT AUTHORITIES IN THE FIELD OF COMPLIANCE CONTROL WITH EU LEGISLATION
100% liquid egg white. From European hens. Without additives. High protein content. 0% fat. Freeze-dried, better preservation. One bottle is equivalent to 32 egg whites.
Enjoy in the most natural way our Liquid Egg Whites at HSN! High protein content. 0% fat. FoodSeries with the best quality!
View more details

What are Liquid Egg Whites?

Liquid Egg Whites from FoodSeries are a food product made entirely from hen’s egg whites, which are thermically pasteurised.

Egg whites are a food very rich in protein , with low carbohydrate content (1%), free from fat and cholesterol ; that have made them the favourite food of athletes around the world for decades.

HSN's liquid egg whites come from the European Union , the place where the hens that produce the eggs are raised.

Because their protein content and low energy intake (50kcal / 100g) make them a food source of high quality proteins , ideal for diets low in calories and / or high protein.

The main protein in egg white is ovalbumin, known for its culinary uses thanks to its technological properties, such as air retention when subjected to mechanical stress (with rods, for example ).

Egg white protein is considered the nutritional source of reference when establishing the Biological Value of other protein sources (Hoffman and Falvo, 2004).

The protein in egg white has a maximum Biological Value and contributes to the gain of muscle mass .

Thanks to the heat treatment process that egg whites receive, it is possible to consume them safely raw , in a shake, provided they are within the stated consumption date and the conservation and storage instructions reflected in the labeling have been respected.

Of course, the treatment they receive does not affect their taste, and makes them an ideal source of protein for:

Enjoy the egg whites however you like! Don’t limit yourself.

The egg whites have been pasteurised following a patented heat treatment method, liotisation.

Liotising is a process for treating fresh whites of chicken eggs, which consists of subjecting the food to a heat treatment that is characterised by slowly increasing the temperature by using a heat exchanger for a period of 30- 240 minutes, until reaching 40-48ºC which is then maintained for a variable period between 1 and 5 full days.

This is the reason why liquid egg whites from HSN are more stable at room temperature, and therefore do not require refrigeration during transport and have a much longer shelf life.

Once opened for the first time, the air comes into contact with the food and the microbiological sterilisation condition is lost, which quickly shortens the safety of egg whites and means we need to keep them refrigerated and consume them within a maximum period of 48 hours.

100% Egg whites and nothing else

Our egg whites are 100% pasteurized egg white , with no other ingredients.

It does not contain food additives of any kind, nor has it received chemical treatments during processing, only heat treatment.

Enjoy the most natural form of egg whites!

The origin of the hens is an issue that concerns many consumers, as it largely determines the breeding method and the care given to the animal.

In Europe, livestock animals are protected by the AHAW (Animal Health And Welfare), which guarantees compliance with the 5 freedom criteria of animal welfare:

The code that you will find on the labeling of our food indicates that the treatment of the eggs with which the product has been made is European standard, as is the origin of the hens.

We know that sometimes the equivalences between packaged liquid egg whites and the number of egg whites to which they correspond is an issue of estimating.

We bring you a table with the most exact equivalences of our product, all the information is indicated using the size Large (L) of the eggs as a reference:

What products can you combine it with?

Once opened, close tightly, keep at 0-4°C, and consume 24-48 hours later. The scoop/product quantity equivalences (grams or milligrams) are indicative, as the density of powdered products may vary between flavours and batches. We recommend the use of a kitchen scale in cases where precise dosing is required.
How to take

Questions
DO YOU HAVE ANY QUESTION ABOUT THIS PRODUCT? DON'T HESITATE TO ASK US!
Question about: LIQUID EGG WHITES
Log in and ask
CUSTOMER REVIEWS 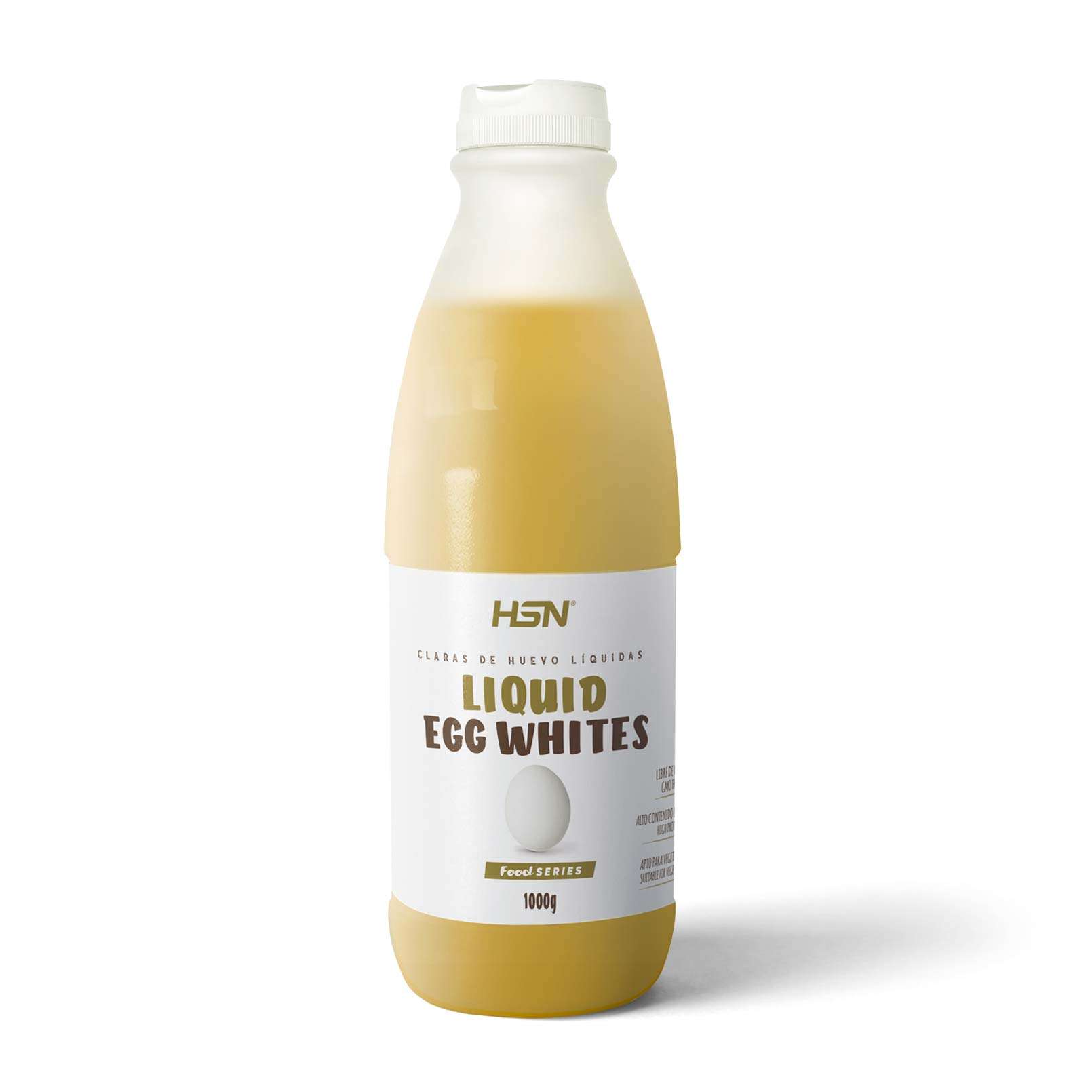 You can notice the difference with other types of egg whites, very natural. Undoubtedly great value for money

I understand that some people like it and it works well for them, but I have not been able to take advantage of this product. For omelets and scrambled eggs, which is what I mainly wanted to try it for, I prefer the whole egg. For pastries (whipped and so on) I suppose it will be fine, but in the end I couldn't try it. Also, I think there should be a smaller format so that those of us who don't use so many egg whites don't spoil it.