In stock. Immediate delivery.
Temporarily out of stock
Warning about our product information
Warning about our product information
Caution: We highly recommend reading carefully all of the information on the product labels before consumption.
Harrison Sport Nutrition, S.L. shows the information about the composition and nutritional values that are provided by its suppliers, therefore is not resposible for any modifications that can occur and consequently for any differences that can be found in the actual product.
2000mcg of Methylcobalamin - Vitamin B12. Active form of vitamin B12. Suitable for vegetarians and vegans.
Buy Methylcobalamin. Vitamin B12 in active form. In 2000mcg tablets, high dosage. Suitable for vegans. Supply of 365 tablets.
View more details

Vitamin B12 (Methylcobalamin) 2000mcg by Vitaminalia is a product in tablets made from the active form methylcobalamin.

Cobalamin is a water soluble vitamin that belongs to B complex vitamins. It performs important tasks to keep the organism healthy, specially those related to regulating the nervous system, protein synthesis and cell reproduction.

This product foes not contain a single ingredient from animals, being 100% suitable for vegetarians and vegans.

Why take Vitamin B12 (Methylcobalamin) 2000mcg?

Because this product is an active and highly bioavailable form of vitamin B12, which is crucial for the proper functioning of our body.

Vitamin B12 for vegans

The main sources of vitamin B12 from food are red meat and guts (like the liver) of these animals.

This entails an issue for vegetarians and vegans alike, who have problems to take this vitamin resulting in a deficiency.

This is one of the main reasons why vegans are more prone to anemia than omnivores, since vitamin B12 is crucial for the blood cell balance.

This vitamin is mostly available as methylcobalamin in nature, which is the same form as the one from this product.

The best way to avoid a deficiency if you are vegan.

Functions of Vitamin B12

Vitamin B12 plays several roles in the organism, such as being a reaction cofactor, that is, supporting some processes:

An other secondary functions that support the proper functioning of our body, physically and mentally.

Why purchase Vitamin B12 (Methylcobalamin) 2000mcg by Vitaminalia?

Vitamin B12 has two active forms, one of them is methylcobalamin, which is the one that has most of the biological activity from this vitamin (Hunt et al., 2014).

Methylcobalamin is a very useful form of vitamin B12 for the organism, since it does not need to be transformed by our body.

Methylcobalamin is a bioavailable form of vitamin B12, interesting to maintain a good balance of this nutrient and prevent deficiencies.

Vitamin B12 is a vitamin food supplement to protect the health of the vegan population or those who do not usually eat many products from animals.

Before, methylcobalamin was naturally obtained from animal guts, which was used to produce this vitamin B12 concentrates.

This is a serious problem for the vegan population who still wants to use this supplement, which is why:

We have not used a single ingredient from animals in our product, meaning that it is suitable both for vegetarians and vegans.

How to take Vitamin B12 (Methylcobalamin) 2000mcg

Take one tablet once a day with a meal.

Our Vitamin B12 tablets have the perfect size to be swallowed without any issues.

You can take vitamin with any meal at any time of the day. Its effects come from having good cobalamin levels in the body, which means that you will reach them after using this product for a long time. The moment you use it is not relevant when it comes to its efficacy.

How can we combine Vitamin B12 (Methylcobalamin) 2000mcg?

You can combine it with other products such as Iron bisglycinate (25mg iron) and Copper chelate (2mg copper).

Once opened, store in a cool (under 25ºC), dry and dark place. Do not exceed the stated recommended daily dose. Keep out of reach of the smallest children. Nutritional supplements should not be used to replace a balanced diet.
How to take

Questions
DO YOU HAVE ANY QUESTION ABOUT THIS PRODUCT? DON'T HESITATE TO ASK US!
Question about: VITAMIN B12 (METHYLCOBALAMIN) 2000mcg
Log in and ask
CUSTOMER REVIEWS 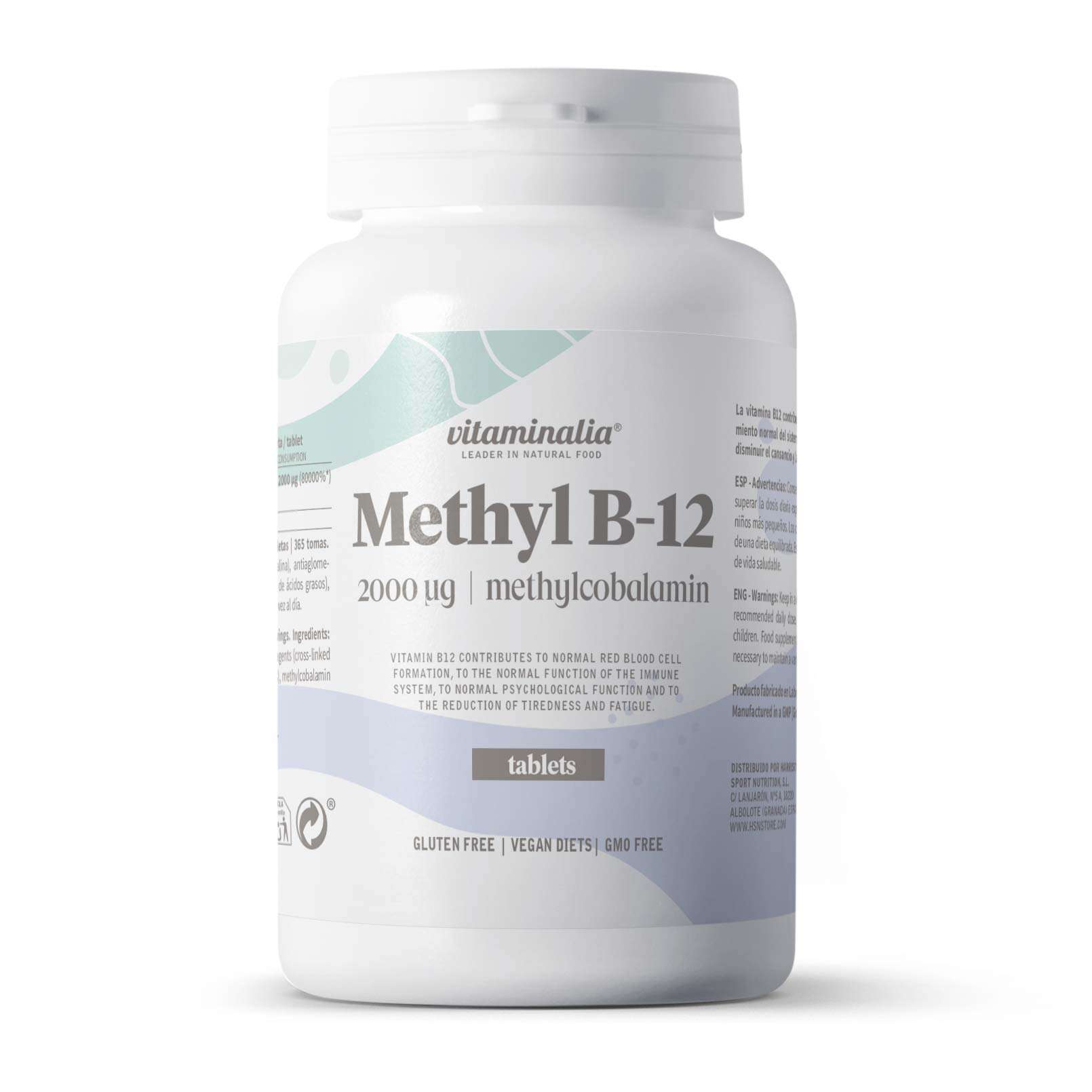 The daily contribution I need

I have always had low red blood cells and tiredness. This supplement is what I needed to take every day to have more energy. I buy one bottle and forget about it for a whole year!

Very happy with the product, it tastes a little weird but not unpleasant.