In stock. Immediate delivery.
Temporarily out of stock
Warning about our product information
Warning about our product information
Attention: The information shown on the website about composition and nutritional information is based on specific production batches. There may be slight differences between the product labelling and the information shown on the website, due to labelling updates.
These variations are minimal and always below the recommended tolerance ranges for food, which are detailed in the following European Commission document on the matter: GUIDELINE DOCUMENT FOR COMPETENT AUTHORITIES IN THE FIELD OF COMPLIANCE CONTROL WITH EU LEGISLATION
Replaces Evodrink 2.0. Isotonic drink for fluid replacement during sport. With Cluster Dextrin®, Palatinose™ and Peptopro®. With electrolytes.
Replenish fluids during sport with Evotonic. Electrolytes with Cluster Dextrin®, Palatinose™ and Peptopro®. Suitable for vegetarians. Gluten free.
View more details
Watch video

View full analysis
Remarkable aspects:
For these sports:
Customers like you also bought

EVOENERGY GEL WITH GUARANA AND CAFFEINE

Evotonic from SportSeries is a food preparation for isotonic drinks, based on carbohydrates and mineral salts, with proteins and amino acids.

Evotonic is a carbohydrate and electrolyte solution for the creation of isotonic drinks intended for consumption before, during and/or after sport for water and electrolyte replacement.

Evotonic complies with the European standard specifications for drinks aimed at replenishing water and mineral salts for athletes.

Evotonic is the new and improved Evodrink 2.0, one of the leading sports drinks on the market with hundreds of satisfied users.

Find out what each of the components of the latest development from our Research and Development team does.

The cyclodextrin we've used belongs to the Cluster Dextrin® patent. We make sure to bring you 100% highly branched cyclic dextrin, of the highest quality and with the most recognised trademark in the world.

And our isomaltulose belongs to the Palatinose™ patent, obtained from the degradation of sucrose from sugar beet.

The combination of Cluster Dextrin® + Palatinose™ is a classic in sports nutrition.

It's been supplemented with a combination of dextrose+fructose, in accordance with the recommendations of the most internationally recognised bodies in the field of sports nutrition, such as the ACSM (American College of Sports Medicine).

Evotonic provides 260kcal/L from carbohydrates, and 85.5% of the energy value of the product comes from carbohydrates, resulting in a high glycaemic response, within the ranges established by the European Food Safety Authority (EFSA): 80-350kcal/L and >75%, respectively.

We have used Peptopro®, a hydrolysed casein protein with a special feature: it has a high degree of hydrolysis and a high dipeptides and tripeptides content.

Peptides are compounds resulting from the joining of amino acids. Di- and tripeptides contain 2 and 3 amino acids. This makes it possible to provide proteins with rapid gastric emptying, ideal for use during sport.

Peptopro®, despite its high degree of hydrolysis, is not as bitter as you might think, as the treatment ensures the release of free amino acids is kept to a minimum.

We've also used BCAAs, the most widely used and valued amino acids in the world of sport, to further improve Evotonic's aminogram.

And to all this we've added electrolytes: chloride, magnesium and sodium.

Chloride contributes to normal digestion by producing hydrochloric acid in the stomach.

The chloride used is derived from sodium chloride.

Magnesium is a mineral all endurance athletes will know about, as:

Magnesium contributes to the reduction of tiredness and fatigue.

The magnesium used is derived from magnesium citrate.

Sodium is the electrolyte present in the greatest quantity in sweat, as it's the main extracellular osmolyte.

The sodium used comes from sodium chloride and sodium citrate.

Why buy Evotonic from HSN?

At HSN, we're known for working with the highest quality standards in each and every stage of the development process of our products.

Don't miss out on all the Evotonic surprises!

Evotonic is an isotonic drink, a real one

Although you won't believe it when you try it... Yes, Evotonic is an isotonic drink that tastes great.

Isotonic drinks (more correctly known as carbohydrate-electrolyte solutions), require specific conditions in order to be used as a drink recommended for sports practice, and bear in mind that:

Not all drinks on the market traditionally associated with this purpose meet these mandatory characteristics.

But, Evotonic does meet these conditions.

The most commonly used commercial sports drink 'A' does not meet the sodium specifications established by the European Food Safety Authority to be considered a carbohydrate and electrolyte solution? 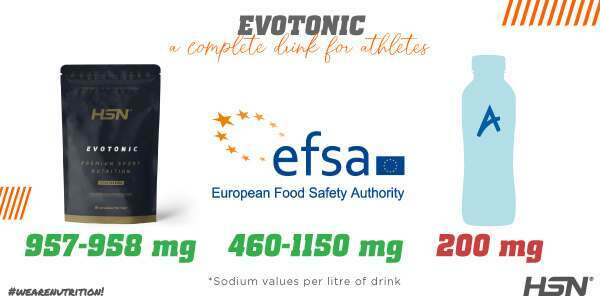 Evotonic is a total sports drink, unlike others that don't meet all the established conditions and therefore stop athletes from benefitting from the effects of carbohydrate and electrolyte solutions:

Evotonic, thanks to its studied formula, brings you these benefits.

Say goodbye to isotonic drinks with mild and salty flavours, Evotonic has been formulated with incredible fruit flavours, with a taste adapted to the needs of sports practice.

We've followed the line of flavours of its predecessor: Evodrink 2.0, which was known for its excellent taste, thanks to reviews from over 5000 athletes who tried version 1.0, after which we reduced the degree of sweetness of the product.

Evotonic has been developed in such a way that its flavour is great, but not overpowering, covering the taste of the mineral salts of the electrolytes it’s made up of, but without the kind of overpowering flavour that can be unpleasant during sports practice.

Evotonic is the ideal drink for replenishing liquids:

Thanks to the use of ingredients specifically designed for use in a sporting context.

Evotonic digestibility is excellent, causing no digestive discomfort or bloating, and doesn't increase intestinal motility either, which can cause discomfort during training or competitions, as other drinks and gels on the market do.

Evotonic, thanks to its iso-osmolar (isotonic) condition: hydrates and is easily absorbed, without heaviness or discomfort.

As if you're drinking water!

Mix one Evotonic serving with 400ml of water..

You can fill your camelback with this solution to replenish fluids during your longest and most demanding training sessions, you just have to respect the product:water ratio.

How much Evotonic should you consume?

According to the latest expert recommendations on fluid replacement during physical exercise (Sawka et al., 2007):

Using between 0.4 and 0.8 litres of isotonic drink per hour is recommended, which corresponds to between 1 to 2 servings of Evotonic per hour depending on the demands of the training or competition.

What can you combine Evotonic with?

It goes great with:

Questions
DO YOU HAVE ANY QUESTION ABOUT THIS PRODUCT? DON'T HESITATE TO ASK US!
Question about: EVOTONIC
Log in and ask
CUSTOMER REVIEWS 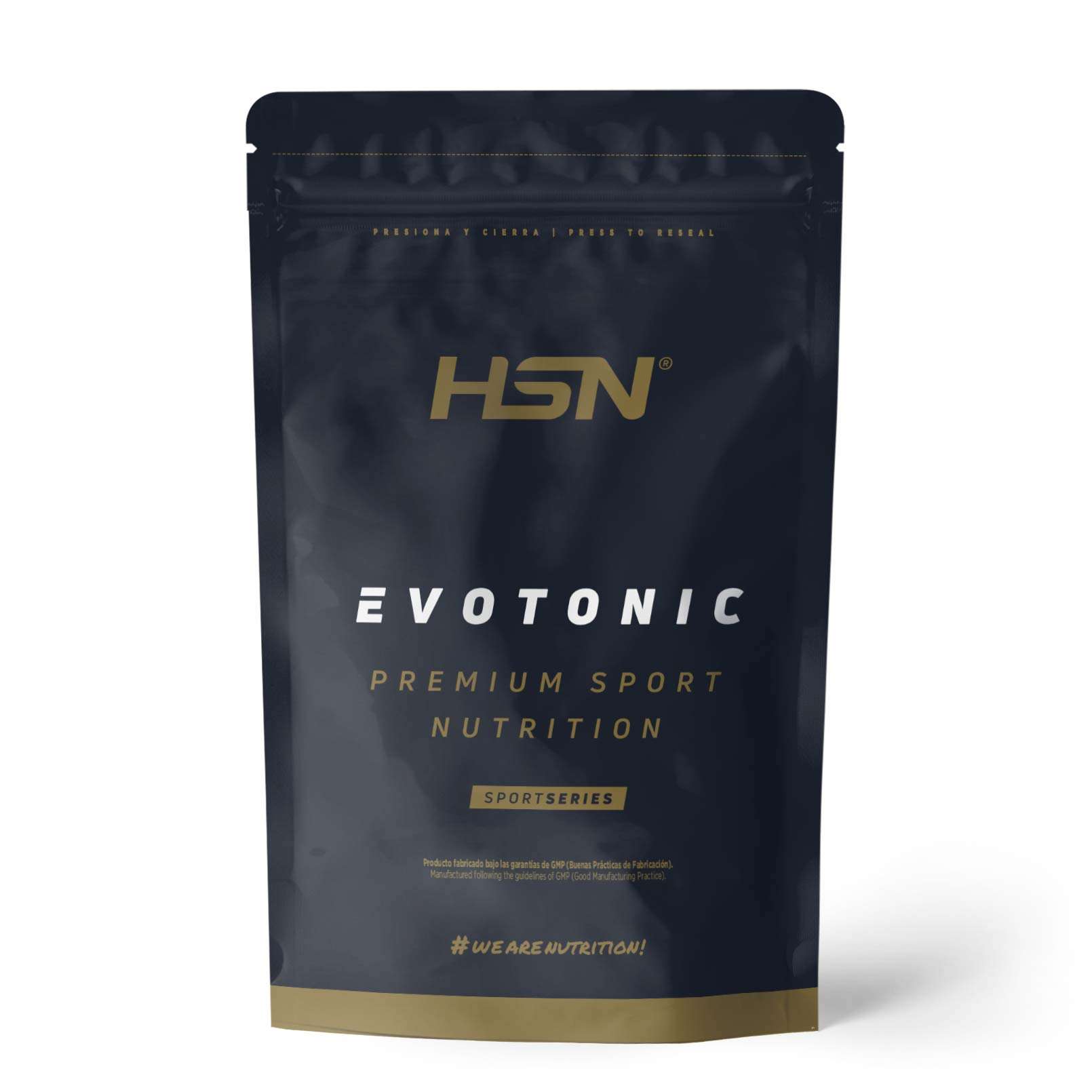 Excellent value for money. I would dare to say that there are not many products on the market that include cyclodextrins and peptopro with such an interesting price. I use it in long workouts or in very hot weather. The orange flavor is good.

As an intra workout in the gym, in sessions of an hour and a half or so the truth is that nothing is noticeable. It is true that the apple flavor is brutal, it tastes very rich to Trina, but nothing crazy in terms of effectiveness (although it is also normal, they are only hydrates xd).