In stock. Immediate delivery.
Temporarily out of stock
Warning about our product information
Warning about our product information
Attention: The information shown on the website about composition and nutritional information is based on specific production batches. There may be slight differences between the product labelling and the information shown on the website, due to labelling updates.
These variations are minimal and always below the recommended tolerance ranges for food, which are detailed in the following European Commission document on the matter: GUIDELINE DOCUMENT FOR COMPETENT AUTHORITIES IN THE FIELD OF COMPLIANCE CONTROL WITH EU LEGISLATION
Vegan protein with golden milk flavour. Based on pea protein isolate. With spices: turmeric, ginger, black pepper and cinnamon. 0% sugar, with erythritol and stevia. Suitable for vegan diets.
Buy Golden Protein Vegan by HSN with a high protein content, sugar-free and with all the essential amino acids. Delivery in 3-5 working days.
View more details

What is Vegan Golden Protein?

Golden Protein Vegan by EssentialSeries is a vegan dietary supplement powder based on pea protein isolate, flavoured with golden milk and sweetened with stevia and erythritol.

Golden milk, also known as tumeric milk or Haldi ka Doodh, is a traditional Indian drink, which is made by using spices from different regions of the country in dairy or plant milks. A drink that's right on trend.

Golden Protein Vegan brings you the authentic flavour of the traditional Indian drink, in a FIT version.

Do you dare try the most daring pea protein formula?

An irresistible sweet and spicy taste thanks to the combination of sweeteners such as erythritol and spicy spices such as ginger.

Golden Protein Vegan by HSN is made using as a base one of the reference vegetable proteins in the food market:

Golden Protein Vegan is developed with pea protein for its unrivalled performance in texture and taste.

At HSN we only work with quality ingredients. Don't settle: Choose HSN!

Who doesn't know turmeric, right? The spice that forms the basis of curry, a mixture that is increasingly used in western cuisine.

Another indispensable spice in the original golden milk recipe.

It is related to turmeric, as the nutritional applicability of both roots comes from India and dates back centuries.

Cinnamon from the Ceylon variety (Cinnamomum zeylanicum) gives a spicy sweet taste to the product.

After the success of our Golden Protein, we ventured into the launch of the vegan-friendly version of the protein, as always using quality ingredients.

A mixture that has been subjected to scientific research (Shoba et al., 1998).

The original Haldi ka Doodh recipe is highly recommended for its wide composition of spices, but it's not a fitness drink.

Golden Protein Vegan recovers the authentic recipe of golden milk with a more current touch, its high protein base.

We use pea protein as a source of protein in the product for its high nutritional quality and great taste and texture.

Enjoy the classic golden milk flavour in a high protein and sugar-free version!

How do we know the nutritional quality of a herbal extract?

One of the aspects to consider when choosing which raw material to use for the development of a product containing herbal extracts is the standardisation of its chemical constituents of interest.

The plant extracts that we've used in the development of Golden Protein Vegan are standardized, which means that the presence of the characteristic compounds of the plant in the product is assured.

With Erythritol and Stevia

Golden Protein Vegan is a sugar-free product, its sweet taste results from the use of sweeteners.

In this formula, we've developed a specific combination of two of the most sought after sweeteners in proteins and other supplements and healthy eating products:

Golden Protein Vegan has been formulated only with the use of these two sweeteners.

With all the essential amino acids

Although vegetable proteins have been said to be'lower quality' than animal proteins for their low amount of essential amino acids, this isn't the case in the concentrated sources of the protein.

What products can you combine with Golden Protein Vegan?

You can use it with:

Once opened, store in a cool (under 25ºC), dry and dark place. Do not exceed the stated recommended daily dose. Keep out of reach of the smallest children. Nutritional supplements should not be used to replace a balanced diet. The scoop/product quantity equivalences (grams or milligrams) are indicative, as the density of powdered products may vary between flavours and batches. We recommend the use of a kitchen scale in cases where precise dosing is required.

Once opened, store in a cool (under 25ºC), dry and dark place. Do not exceed the stated recommended daily dose. Keep out of reach of the smallest children. Nutritional supplements should not be used to replace a balanced diet. The scoop/product quantity equivalences (grams or milligrams) are indicative, as the density of powdered products may vary between flavours and batches. We recommend the use of a kitchen scale in cases where precise dosing is required.
How to take

Questions
DO YOU HAVE ANY QUESTION ABOUT THIS PRODUCT? DON'T HESITATE TO ASK US!
Question about: GOLDEN PROTEIN VEGAN
Log in and ask
CUSTOMER REVIEWS 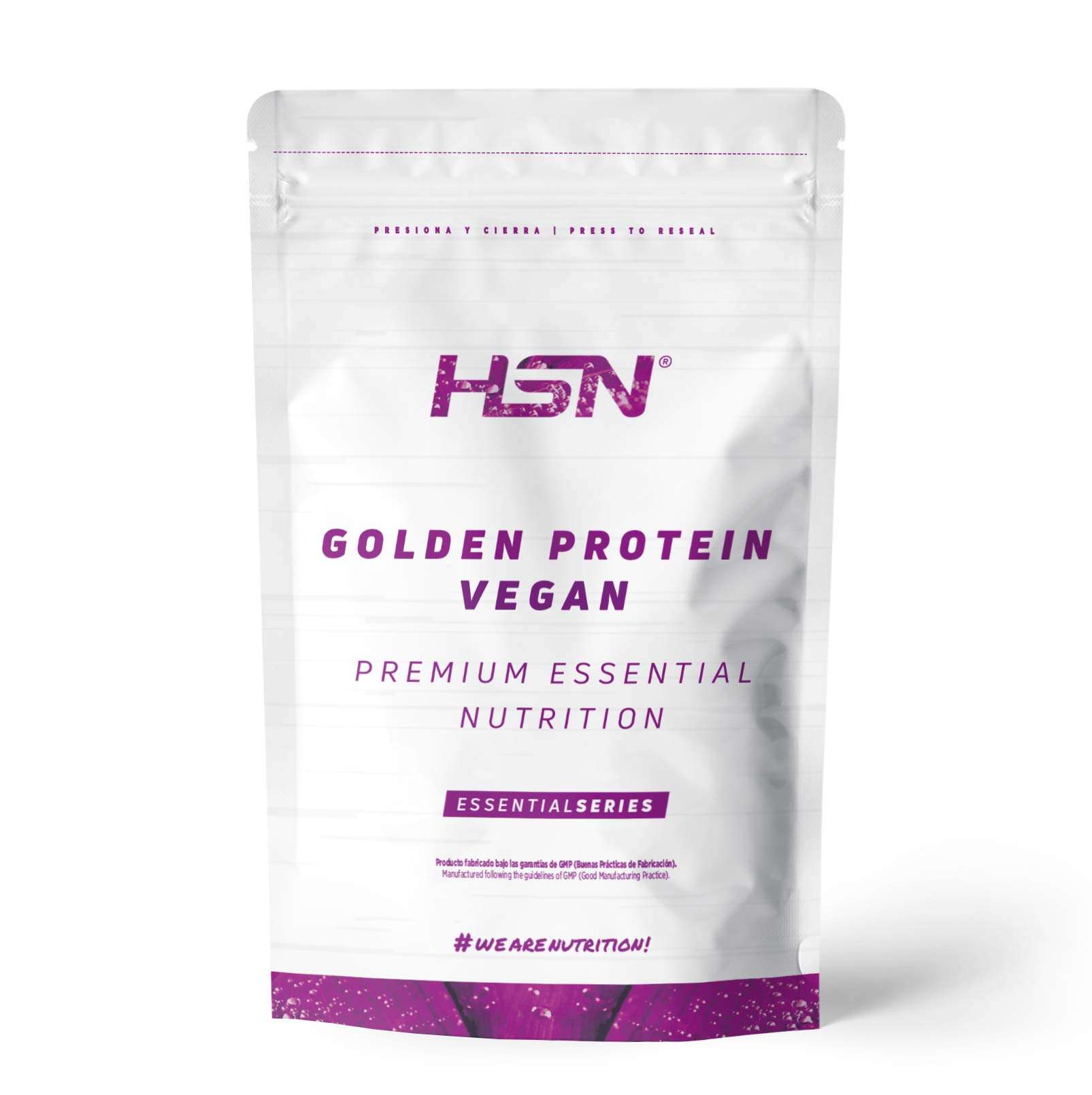 I had tried the other Golden Protein and I loved it... I like this one even more! I like its taste better (it doesn't have that touch of whey), I also like its texture better (thicker and more floury), and I also feel it is very nutritious and leaves me satiated.

It is good but it is a little strong in the mouth and for the stomach, maybe too much turmeric and pepper.