In stock. Immediate delivery.
Temporarily out of stock
Warning about our product information
Warning about our product information
Attention: The information shown on the website about composition and nutritional information is based on specific production batches. There may be slight differences between the product labelling and the information shown on the website, due to labelling updates.
These variations are minimal and always below the recommended tolerance ranges for food, which are detailed in the following European Commission document on the matter: GUIDELINE DOCUMENT FOR COMPETENT AUTHORITIES IN THE FIELD OF COMPLIANCE CONTROL WITH EU LEGISLATION
Cashew butter. 100% Natural. No palm fat. No added sugars. 0% additives.
Do you prefer cashew butter with a creamy texture? 100% natural without palm fat and no added sugars. Buy with maximum discount!
View more details

HAZELNUT AND COCOA SPREAD WITH COCONUT

COCONUT AND PEANUT BUTTER WITH HONEY

What is Cashew Butter?

Cashew butter by FoodSeries is a food preparation based on cashews.

96% of the butter is made up of toasted cashews, it contains 4% sunflower oil solely for organoleptic reasons, to improve its unctuousness and achieve a more solid and uniform texture.

This Cashew Butter is 100% natural and vegan-friendly.

Cashew butter is a food source that provides a lot of energy, and it can be used in mass gain diets or in any type of diet in general, in moderation.

It's a source of protein and minerals.

Cashew as a source of vegan proteins

HSN cashew butter is a source of protein – 20% of its nutritional composition is protein; so it can be considered a good source of plant protein.

Protein contributes to the maintenance and gain of muscle mass.

Cashew butter is rich in minerals

Cashew butter is a food with a high mineral content such as:

Benefit from its nutritional richness in the most natural way!

Why buy Cashew Butter from HSN?

Cashew butter is the nut butter with the texture best suited for spreading.

Thanks to the presence of a little sunflower oil in combination with the type of fatty acids naturally present in the cashew itself, its texture is more solid, reminiscent of commercial butters.

Searching for a nut butter to spread on your breakfast toast? Without a doubt, Cashew Butter is for you!

Why not olive oil?

Many consumers have asked us why we've added sunflower oil to the product.

The reason is simply to balance the naturally drier texture of the cashew butter. The preparation only contains 4% sunflower oil, just enough to improve its fluidity.

We've not added olive oil as some users have requested as the olive has a higher acidity point, which significantly affects the taste of cashew butter; its flavour is completely overshadowed by olive oil.

Sunflower oil is a source of polyunsaturated fatty acids like Omega-6, and does not affect the natural taste of cashews.

Cashew butter is the mildest flavour choice among nut butters.

It is characterised by a light sweet aftertaste, without added sugars, and an authentic cashew taste.

The the ideal butter to start realfooding® and adapt to enjoying the natural flavour of food.

How do you use the cashew butter?

After irst opening of the product, you'll notice a small layer of surface oil.

Don't throw it out!

This is just natural cashew oil, which has separated as our butter contains no emulsifier additives and is 100% natural.

Simply use a spoon or fork to stir the contents of the jar until its texture is creamy and the oil has been completely homogenised.

And it's ready to enjoy!

How much cashew butter should you eat?

You can have as much as you need to meet your dietary needs.

Use it in recipes and...

Don't let the spoon get the better of you! Once you try it, you won't be able to stop.

What products can I combine it with?

Roasted Cashews (96%), sunflower oil. (From more than one country). It may contain traces of peanuts, sesame seeds or other nuts.

Store at a temperature that does not exceed 25ºC in a cool and dry place, away from sunlight. Once opened, consume within 3 months. It can contain traces of peanuts, sesame seeds and/or other nuts.

Roasted Cashews (96%), sunflower oil. (From more than one country). It may contain traces of peanuts, sesame seeds or other nuts.

Store at a temperature that does not exceed 25ºC in a cool and dry place, away from sunlight. Once opened, consume within 3 months. It can contain traces of peanuts, sesame seeds and/or other nuts.
How to take

Before eating the cashew butter, you have to mix the contents until you achieve a creamy consistency. Try it on toast or buns or add it to your shakes, biscuits or cakes.

Questions
DO YOU HAVE ANY QUESTION ABOUT THIS PRODUCT? DON'T HESITATE TO ASK US!
Question about: CASHEW BUTTER
Log in and ask
CUSTOMER REVIEWS 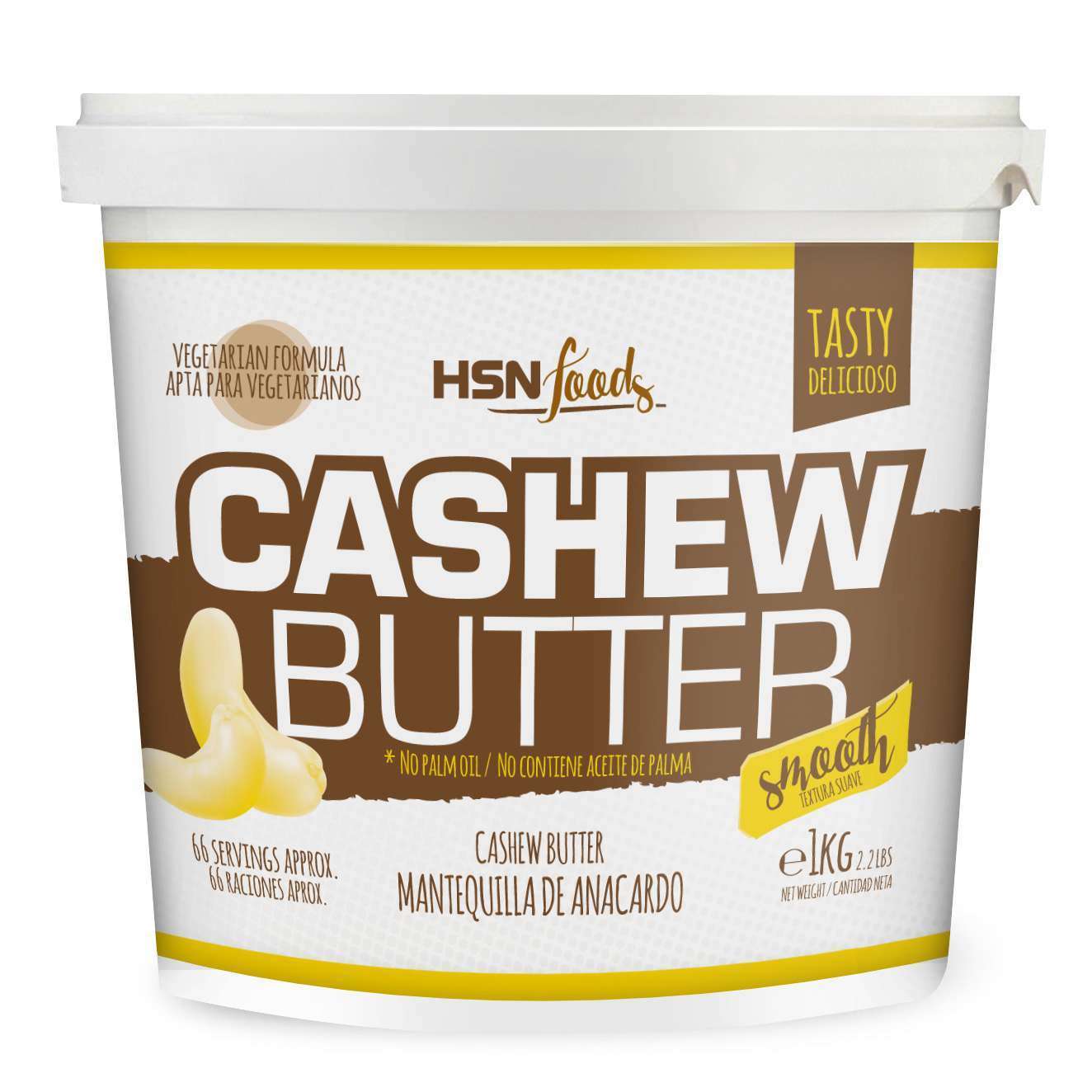 Cream very rich in flavor and with a good nutritional composition.

It doesn't taste like natural cashew nuts, I won't buy it again, I'll stick with the almond or peanut ones.

Show original language
Was the review helpful? Be the to rate the review
Alfredo V.

Hi Cz, Cashew butter contains 96% roasted cashew nuts, so its flavor is typical of these nuts. We are sorry that the product is not to your liking, and we invite you to try other options such as our EXTRA CREAMY CASHNUT BUTTER. Best regards.