We make it easy for you! Discounts in EVERYTHING
In stock. Immediate delivery.
Temporarily out of stock
Warning about our product information

Notice about our product information.
Caution: We highly recommend reading carefully all of the information on the product labels before consumption.
Harrison Sport Nutrition, S.l. shows the information about the composition and nutritional values that are provided by its suppliers, therefore is not resposible for any modifications that can occur and consequently for any differences that can be found in the actual product.
100% isomaltulose powder (Palatinose). RAW format, unflavored, without additives. Technological carbohydrate with time released energy. Ideal for long workouts.
Remarkable aspects:
For these sports:
You can see also: See more in Carbohydrates See more in Sport Nutrition
FAST SHIPPING! AND ALSO...

The Palatinose by HSNraw is the commercial name of isomaltulose. This new generation carbohydrate has been specially designed with a stronger bond between its monosaccharides that results in a progressive energy release. Therefore, the blood sugar will not rise so suddenly, producing a lower insulin response and good bowel tolerance.

Palatinose powder by HSNraw is the perfect carbohydrate for athletes who carry out workouts that require a timed release energy supply, or to sweeten fitness recipes as well as for those who suffer diabetes.

HSN has come up with a product that is made from 100% isomaltulose powder. In fact, it does not have any kind of additive, just isomaltulose from the registered trademark Palatinose™ which ensures the highest quality and the best treatment of the raw ingredient used to make our product.

Palatinose is a disaccharide, like tabletop sugar. In fact, even though it is naturally present in honey, we obtain it from sugar cane. However, in order to do so, the sugar is subjected to the action of an enzyme that changes the bond between its monosaccharides (glucose and fructose). The result is that the bond will become stronger, resulting in unique properties. Do you want to know what we mean?

It does not cause caries

Isomaltulose does not significantly alter the mouth pH, unlike tabletop sugar, which is a highly cariogenic carbohydrate. The microbial flora from the mouth is not capable of breaking the bond from isomaltulose. That is why it does not produce acids that will produce plaque around the enamel, so that it will not damage the teeth.

Changing the position of an isomaltulose bond within the monosaccharides that make it up, will mean that our bowel enzymes will need more time to undo that bond. These enzymes are in charge of breaking the bonds so that we will be able to absorb the carbohydrates. That is why palatinose is not absorbed in the first third of the small bowel like other sugars. On the contrary, it is slowly absorbed throughout the whole bowel. In fact, it has between a 75-80% slower absorption rate than sucrose.

A slower absorption of palatinose means that there will not be blood sugar peaks. The nutrient supply is released gradually, providing energy for a longer period of time. The fact that there is no quick glucose release means that the pancreas has to produce less insulin. Therefore, this will increase the oxidation of free fatty acids than sucrose, since insulin is an antilipolytic hormone (Jung and Choi, 2014). Therefore, it is a sweetener which could be potentially used to replace sugar in the diets of those who suffer obesity or overweight. Palatinose has a low glycemic index of 32.8. 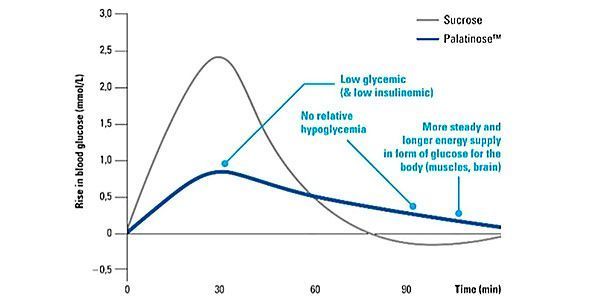 Many isotonic drinks are made with an acid base, usually a pH what white sugar is not capable of support, which is why it becomes osmolarly active. Therefore, the isotonic drink actually stops being isotonic. Isomaltulose is much more stable than sugar and it is resistance to acid bases, so that it will keep all its properties for a longer period of time without suffering alterations. It will provide energy gradually apart from keeping you hydrated.

HSN brings you high quality palatinose, with certified origin and treatment of the raw ingredient. Moreover, it does not have additives or excipients, as well as other carbohydrates that may alter the properties of the product. In fact, it has a perfect neutral flavor that you can combine with other carbs or protein. All this with an unbeatable price thanks to our in-house production and the fact that you purchase the products directly from our factory, without intermediaries!

Palatinose is the ultimate carbohydrate that will provide energy for a long time, without producing caries. Moreover, it is not as glucogenic or insulinogenic as other sugars, apart from being more stable.

Your best ally for the longest workouts!

Are you interested in its effects on the sport performance? Combine Palatinose powder with Cyclic dextrin by HSNraw to get a multi-phase energy complex. Moreover, you can also use Evolytes, thanks to its sodium content. It will increase the carbohydrate absorption in the bowel (Poulsen, Fenton and Rieg, 2015).

Are you interesting in its uses for cooking as a sweetener that does not cause caries? Combine it with our defatted cocoa powder and erythritol powder to increase its sweetness. Your recipes will taste incredibly delicious and they will be suitable for people with diabetes!

*All the information that has been used in this product description has been written with information from the review by Sawale et al. (2017)

Adjust intake to your needs. Suggestion: Mix 1 scoop (50g) with 250-300ml of water or fruit juice. Drink from 1 to 3 times a day in order to increase your daily intake of healthy carbohydrates. Palatinose® can also be used as a healthy sweetener.