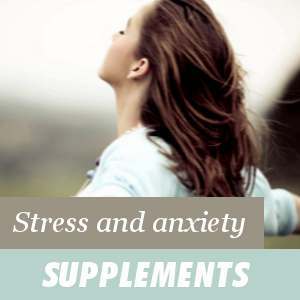 When someone suffers from anxiety during a long period of time, it may prevent them from carrying out their normal daily life. According to clinical studies, dietary supplements produced for fighting anxiety may relieve physical and psychological symptoms caused by anxiety.

What is anxiety and how can we treat it?

Substances like L-theanine, GABA and Rhodiola rosea are the best treatment for anxiety problems.

Experiencing a feeling like anxiety can be a normal reaction to new situations, such as divorce, moving, or a decision that affects your job or professional career.

However, when the anxiety lasts a long time, without the existence of these triggering external factors, it may have a negative effect on our body.

Fear is a natural reaction to a threat. When a threat takes place our body instinctively can experiment a reaction to fight or flee, which will cause the release of hormones and neurotransmitters in our body.

This type of response is a natural biological process for survival when facing a danger or potential risk.

Nevertheless, when someone has prolonged anxiety, clinical studies have shown that the uncontrolled hyperactivity that it causes, reduces the efficiency of the response to fight back or flee. This may result in changes in the brain functions and in the mental state of well-being.

What are the most frequent symptoms of anxiety?

Anxiety is caused by a response to flight or flee, from a danger, that surpasses a normal reaction. The symptoms may be physical or psychological.

The most common physical symptoms are:

The most common psychic symptoms are:

Those who suffer from fear for a prolonged time can experiment any of these problems, which can impact our general health and affect our life quality.

Anxiety may be an underlying symptom of other more serious psychological disorders, such as:

Anxiety disorders are diagnosed based on the diagnostic criteria for psychological disorders (known as DSM-V).

Clinical studies have shown that dietary supplements can be the best treatment for nervous tension. Some supplements can help to control the normal reaction to fight or flee, and strengthen mental health.

According to clinical trials, dietary supplements with the following active ingredients can help to reduce anxiety:

GABA, the neurotransmitter that increases well-being

GABA (gamma-aminobutyric acid) is a neurotransmitter that reduces the hyperactivity of the brain and calms nerves. This neurotransmitter has a relaxing effect and intervenes in the activation of glutamate, as well as reducing nervous tension.

According to clinical studies, GABA can not pass the brain-blood barrier. How ever:

an increase of GABA levels can help to control anxiety.

The release of GABA can also be produced by taurine, L-theanine, vitamin B6 and magnesium.

The golden root (American Rhodiola rosea) is a plant that helps increase performance and has other effects, such as improving the state of mind derived from nervous tension.

A clinical study showed that people who took Rhodiola for 10 weeks, with minimal side effects, experienced fewer anxiety problems. The participants in the study had been diagnosed, according to DSM-V criteria, with generalized anxiety disorder.

According to the researchers, Rhodiola rosea improves mood, performance and attention, and is therefore a natural alternative, better than medication, to relieve tension and depression. The effects of Rhodiola are produced by normalizing the body's natural response to stressors.

L-Theanine is an amino acid that is contained in green tea and has soothing and relaxing effects. L-Theanine is one of the most popular remedies for treating anxiety. It helps to increase concentration and, at the same time, helps to calm nervousness.

L-theanine increases the release of the neurotransmitter GABA and reduces nerve stimulation of the brain.

According to the researchers, L-theanine decreases heart rate, and also inhibits the release of adrenaline from sympathetic nervous system and the increase of heart rate, typical of anxiety problems.

Who benefits from nutritional supplements against anxiety?

If you can not remove the worries and concerns from your life style, the treatment with plant extracts and dietary supplements that we have referred to, is the best option to control, naturally, nervous tension.

These food supplements help people that have some of these problems:

Do dietary supplements against anxiety have side effects?

An excessively high dose of GABA can produce fatigue. However, this can be solved by reducing the dosage.

Rhodiola rosea and L-theanine are completely safe and no type of side effects have been described, even when taken on a continuous basis. For this reason they are a natural alternative for the treatment of nervous tension problems.

Contraindications of dietary supplements for anxiety

It is recommended to previously consult a doctor before taking dietary supplements against anxiety, in cases of pregnant or lactating women, and children. Because the studies on the effects of the intake of GABA, Rhodiola rosea and L-theanine supplements in these population groups have not been sufficiently contrasted.

Care must also be taken before taking GABA supplements in the case of people who suffer from renal or hepatic diseases, or people who take medications for the nervous system, as those drugs may include barbiturates and benzodiazepines.

In any case, if you are taking other medications and are not sure on the convenience of taking this type of dietary supplement you should previously consult a doctor or pharmacist.

Why is it convenient to take nutritional supplements for anxiety?

The anxiety that does not arise from a specific, one-off, problem, and that lasts a long period of time can have repercussions on mental health.

Fear is a natural response to dangerous situations, but if you suffer from uncontrolled fear, dietary supplements can help calm this situation and are much more natural than medications.