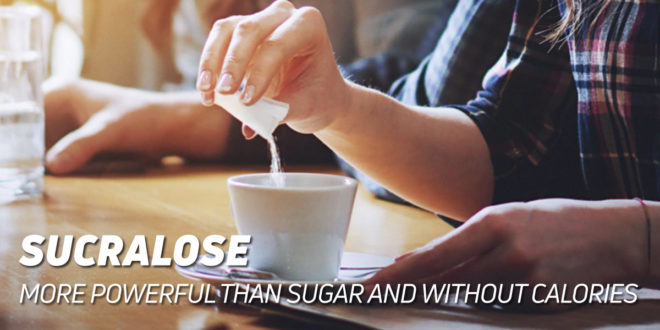 Sucralose is the sweetener everyone has been talking about in the last few years.

This is no surprise, since we are talking about a “synthetic sweetener” that comes from sugar, but without calories. It has passed phase III clinical trials, it has been sold and it still passes phase IV clinical trials… Or not?

Do you want to know everything about sucralose? Keep reading because I am going to tell you all you need to know.

Sucralose is an intense, calorie-free and synthetic sweetener.

It is ~563 times more intense than table top sugar (which is the reference to assess the sweetness of a product).

Depending on the source, you will find that its sweetness is between 500-600 times more intense than sugar. But the functional difference between 500 and 600 is unimportant.

Why is sucralose interesting?

Because it comes from sugar, which has been slightly modified in order to eliminate its caloric potential.

Figure I. Time/intensity of the sweetener samples (Rodrigues et al., 2015).

Since it comes from sugar, sucralose has a “sweetness” curve more similar to that of sugar than other sweeteners. The flavor is quite similar and it lasts more or less the same time in the mouth.

Our palate “enjoys” sucralose because it is similar to the sugar that it is already used to, due to social education and because it happens naturally in all kinds of foods.

Well, so it is a sweetener without calories that is similar to sugar in terms of its molecular structure and functions. Where is the trick? Let’s see…

Like the rest of sweeteners, sucralose has been surrounded by terrible misconceptions.

There are posts everywhere that state that sucralose is associated with DNA mutations, the onset of cancer, alterations in the production of hormones that regulate the hunger and satiety, gastrointestinal alterations, glucose metabolism…

You can even find good quality consultancy websites that state that the toxicity level of sucralose is actually HIGH:

Figure II. Reported toxicity level of sucralose by a website without legal validity.

Wait a minute! Where does this statement come from? Well… from nowhere actually, after showing this shocking red panel with “HIGH TOXICITY” written on it, the same page states that…

“Food additives do not entail any risk for our health as long as we consume them moderately, according to the instructions of the product, in non-allergic people…”

What a surprise, right?

Does our body absorb sucralose?

Sucralose is barely bioavailable. In fact, it is believed that we absorb around a 9-22% of the sucralose we consume. But this information has been calculated according to radioactive tracers that mark the retention and excretion of this substance.

We know that we excrete most of it (around an 80%) through the feces and the rest through the urine.

This information is hard to interpret… Because we actually have no idea… A few years ago people said that we excreted sucralose completely, without absorbing anything.

When someone does a radio-chromatography of a methanolic fecal extract we can see how the retardation factor detects an element (sucralose), but there are “two peaks” in its highest point. What does this mean?

Well… Either there is a slight drop in the wave of a single substance or, like the authors of the study concluded: “there are two different radioactive chemicals”. Either way, that interpretation is not fully convincing…

This means that sucralose, metabolized or not… is completely eliminated. In case of being metabolized, the molecular changes would be minimal and even unknown.

That is why sucralose is like an “insoluble fiber”. It is not absorbed as such as what is absorbed is not metabolized. If it were, it would not have clinical signification of any kind.

Some people claim that sucralose is a carcinogenic substance.

But one of the main features of a carcinogenic element is that it has to be highly electrophilic, in other words, highly reactive. However… sucralose is not electrophilic, it does not contain structural signals that may warn us against a possible genotoxic or carcinogenic activity (Berry et al., 2016).

Are there more studies about the carcinogenic potential of sucralose? Yes, there are some.

One of the most popular ones was the one by Van Eyk (2015), who showed abnormal and lethal effects in two cell cultures (colon and kidney).

Is it reliable? Well… apparently not:

A false-positive result is easy to observe in an in vitro model: when the cell dies, the DNA breaks down and migrates. This is not necessarily relevant in an in vivo model. This is a “non-replicable positive result”:

Figure IV. Analysis of the study by Van Eyk (2015) which assesses the limitations of the procedure. (Magnuson et al., 2017).

Then… is it cancerous? What if I told you… that it is anti-cancerous?

The previous trial used a protocol that is used to detect preventive properties against cancer. Its results were not interpreted as “DNA damage” but as “DNA protection“.

“These results cannot be directly applied to an in vivo situation, since DNA damage seems to affect with concentrations over 1mM. This is impossible in vivo through its oral intake”

Moreover, there are many clinical trials who show us how sucralose does not express mutagenic effects of any kind. Moreover, it does not damage the DNA or improves it…

Let’s go back to where we were before. Absorbing just a 15% of the few mg that we may take in a day is truly going to have any effect? The answer is obviously NO…

Can sweets fool our organism and trigger an insulin peak that can negatively affect us? NO!

The physiological processes that regulate the glucose metabolism are quite complex. In fact, there is a wide range of endocrine proteins that have a signaling and regulatory potential which balance our organism.

The body “cannot be fooled that easily”.

Figure V. Concentration of incretins GLP-1 and GIP in two hours during a OGTT. After taking carbonated water with 68mg of suralose and 41mg of potassium acesulfame (purple) and other experiments. Compared to carbonated water (blue). Sylvetsky et al., (2016).

Of course, the blood glucose, peptide C (an insulin marker) and insulin concentrations were constant, without suffering alterations.

Figure VI. Concentration of insulin and peptide C in two hours during a OGTT. After taking 68mg of sucralose and 41mg of potassium acesulfame (purple) and other experiments. Compared to carbonate water (blue circle). Sylvetsky et al., (2016).

“Taking a high dose of sucralose did not have significant effects on the area under the curve of glucose and peptide C, measured in the next 4 hours when compared to the placebo”

Sucralose does alter the microbiota…

But there are other things that alter the microbiota:

Sleeping 30 more minutes, eating rice, doing or not doing physical exercise, eating more or less vegetables or fruit, using probiotics or not, where you live, the amount of alcohol you drink, dairy products…

And you know what?

We BARELY know anything about our intestinal microbiota, so there are thousands of factors that we are not aware of.

But even if we knew the magnitude of these factors, we know how much change it causes, but not if it is good or bad. In fact, it is hybrid since there are positive and negatives changes in everything we do in life. What happens is that the final result will be either good or bad.

Then…? We know nothing…

“The Gut Project” has more than 10000 scientists who are studying the intestinal microbiota all over the world. In fact, they focus on different populations, analyzing the magnitude of the changes and their influence…

The use of sweeteners is not even reflected.

But it would be ridiculous to worry about the effects of sweeteners on the microbiota. Particularly if we eat less than 30 varieties of vegetables a week, which does have a big impact.

Figure VIII. Phylogenetic diversity review and the size of the quantitative and qualitative effect of taking 30 types of plants weekly and less than 10. (McDonald et al., 2018).

I am sure that you, reader, do not eat 30 types of different vegetables a week. Then, focus on that and forget about the effects of mg of sucralose…

The intestinal microbiota is dynamic and changes constantly

Suzanne Devkota is a Doctor in biomedical sciences who specialized in the influence of the diet on the intestinal microbiota. A few months ago, she uploaded a very interesting post in her Instagram and I would like to share it with you. This will give you a very general idea about what we know about the microbiota…

Today I want to highlight to you just how diverse and complex your gut microbiome is. ⠀⠀ The image shown here is the whole genome of a very cool gut bacteria we’re studying in the lab. To read this diagram you look at each concentric ring individually. Each ring represents an individual bacteria we isolated from Crohn’s disease patients. And each little line in any circle is a bacterial gene. ⠀⠀ So if you count, there are 10 rings. Thus this picture is showing you the genes of 10 different versions of a bacteria. The crazy thing, is they are all the same bacteria, they just came from different patients. All you have to do is look at how much the colors vary from circle to circle to see how different the genes are even within the same species of bacteria. ⠀⠀ Just like doctors look for genetic mutations in people, we look for genetic mutations in the bacteria. ⠀⠀ Genetic diversity relates to different functions. So this diagram highlights that the same bacteria likely can do very different things depending upon its host (you). Likely what you eat, and your natural body chemistry determines what genes your microbes turn on and off. They are highly responsive and adaptive to your body. ⠀⠀ This makes studying the gut microbiome enormously challenging, but I believe this variability can also can give us important clues about the person in which they reside. So I choose to embrace the challenge. #wholegenomesequencing #microbialdiversity #littlemachines #sciencerocks 🤘🏼#microbesrule

There, each line is a “different gen of the expressed subtype” of a same bacteria that is also changing constantly! We are as close to get to know the microbota in depth as we are from scratching a diamond with our nails.

Even though it does alter the microbiota, we do not know if it is either good or bad…

Take Sucralose without any worries, after all, it has passed several tests for its commercialization.

Previous NEAT: Is it Important to Lose Weight?
Next Omega-3 and its Functions for Health Beyond our Sight!
Related Articles 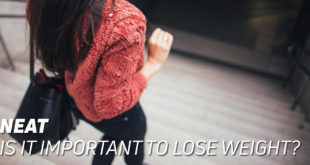 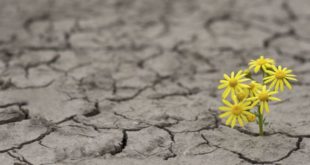 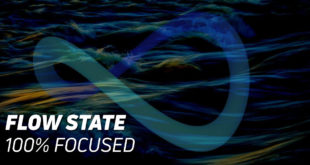 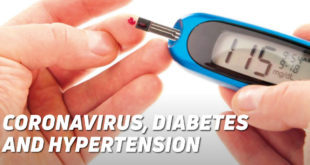 Are Patients with Diabetes and Hypertension vulnerable to Coronavirus?

The two most frequent comorbidities in patients infected by coronavirus are diabetes and hypertension. We …